I have some empties pictures that have been sitting in a folder on my computer for a while, so I think it's time to post these if I'm ever going to. They're just random stuff - mostly not nail polish. I hardly ever use up nail polish other than maybe base or top-coat or treatment products. (There is one nail product down at the bottom, here.)

This is expensive but it's a really good product: Briogeo's Don't Despair, Repair! conditioning mask: 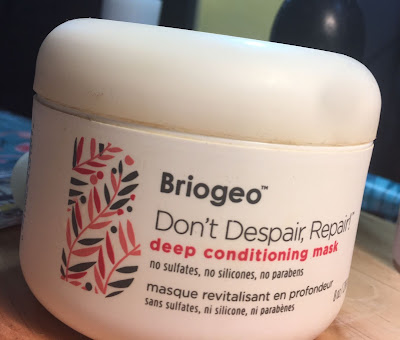 Some of these are premium samples. This is another product that I really like, and I bought a small size of it and then a larger size. The Pep-Start products seem to be very reasonably priced - not much more expensive than similar drugstore products, at least for the moisturizer.

This is a Caviar (hair) cream sample that I've had for a good while. The brand here is Alterna, I believe, and  it looks from that link at Ulta that they've changed their packaging and I don't see that exact product offhand. But I'm sure there's still something similar. It's a good product, but I don't normally pay these premium prices for hair products (the Briogeo up above being my one-time exception).

(I take it back - here it is at Sephora. I imagine Ulta has it too. Sometimes Ulta's website is not the easiest thing to navigate.)

This is a full-size product that I bought at Sephora a couple of years ago - I believe I had had a sample of it back when I was getting Sephora boxes. I've never been sure if a "detoxifying" cleanser is really what my face needed, but I liked this cleanser and I only used it once or twice a week when I washed my hair, which is why it lasted so long. I really recommend it though, a tiny bit of it goes a long way and it didn't dry out my skin.

Oh, look, there's a nail product after all - Cuccio base coat. I actually liked this a lot and I would totally buy it again later on. 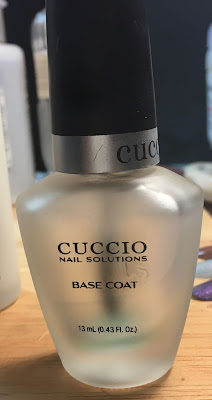 (I'm sure you can get Cuccio products other places but I've only ever bought it from HB Beauty Bar.)

Earworm material: Do You Sea What I Sea?

Previously posted on Instagram: OPI Do You Sea What I Sea? 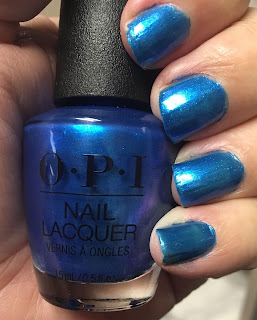 It was very shiny so I decided to try it with matte top-coat (I used this NeverMind mini): 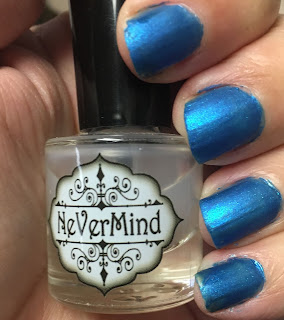 It's really pretty either way but I think I liked it matte the best.

I do most of my shopping online (and my husband likes to buy groceries, so I don't even go in the grocery store that much any more), so I haven't seen what nail polish displays there are to see in a while. My impression is that there aren't that many of them any more, and when I wandered into Walgreen's last week, it kinda looked like I was right - they had two. Well, maybe really three because this one appears to be two displays shoehorned together (CND + Ardell): 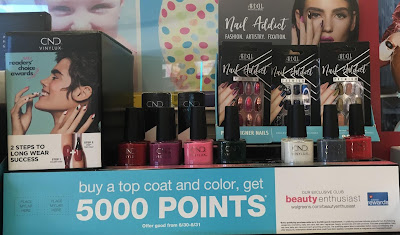 The only other one was Insta-Dri: 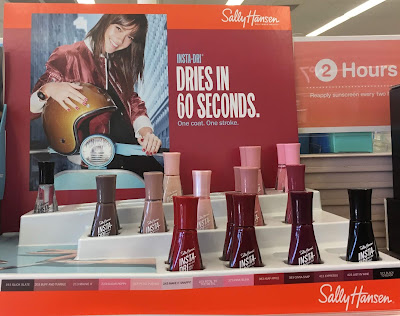 This doesn't really look like summery colors - is this an early fall display, you think? I don't remember seeing most of these color names before, except for Expresso which I have had for a year or more. I'm guessing that at least some of these are new or were new fairly recently.

This started because of a Kathleen Lights video, so I'll link that first rather than putting it down at the bottom like I usually do with videos. (That doesn't mean I expect you to watch it right now before you read any further. That part's up to you!)
Kathleen does collabs with Colourpop, and they were coming out with new products, so Colourpop had a "Kathleen's favorites" sale (which has now ended). I had been wanting to try out Colourpop concealer for a while now, so I used Kathleen's sale as an excuse to buy that and more. 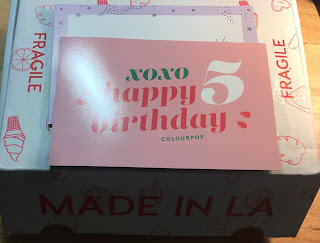 I think Colourpop is 5 years old? that's what I decided this card was referring to. 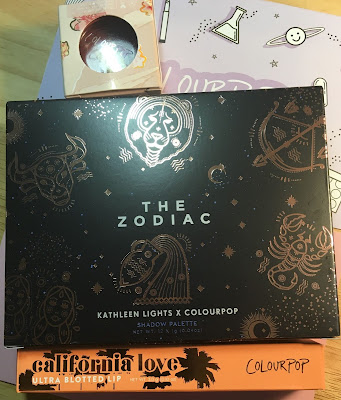 I tried out several of the products that Kathleen talked about. I started out looking at the separate Zodiac shadows, which have just been released - I put two of them in my cart and then I went, "Y'know, it wouldn't cost much more to buy the whole palette," and so that's what I did.

Here's the items out of the boxes: 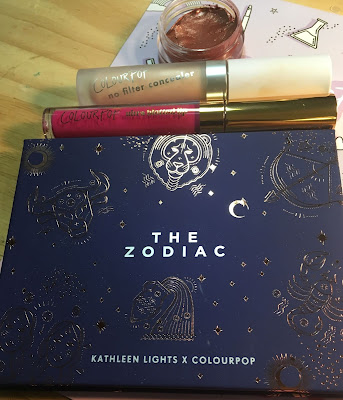 Top to bottom: Jelly Much shadow in Whistlin' Pixie (also see below), Colourpop No Filter concealer, Ultra Blotted Lip in Double Double, and the Zodiac palette. (I apparently didn't take a picture of the inside of the palette, for some reason, but you can see it here, not to mention that each individual eyeshadow color has a page, and the zodiac pigments -which I did not buy - also have pages, and so do the new blushes that were just released - and all that stuff is listed here.) Whistlin' Pixie was actually a color that Kathleen mentioned - and I jumped at it because I love coppery anything - but I don't think the blotted lip was one that she mentioned. I probably wouldn't have bought the Ultra Blotted Lip at all if she hadn't been talking about it, though, because it just wasn't on my radar. Kathleen's lip picks, especially, tend to be more neutral than I like, a lot of the time. Neutrals just aren't all that flattering on me. 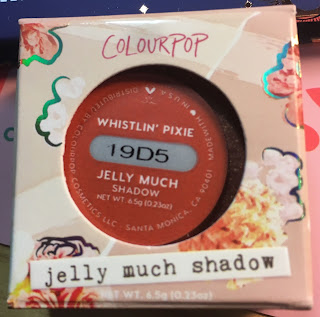 This is just a couple of random things I've bought lately and hadn't posted the swatches for.

This is Plum Euphoria, from Sally Hansen Color Therapy: 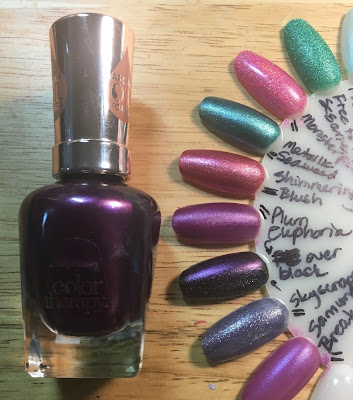 I've worn this, and I really liked it. "Shimmery plum" probably basically covers it. (Some pictures of the bottle make it looks like it's got some shift to it, but on the nail you just don't see that, unfortunately.)

And then this one I haven't worn yet - that's China Glaze Skyscraper: 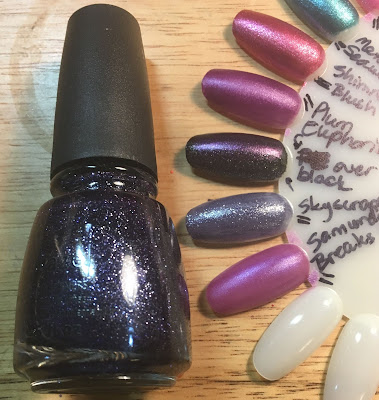 This is an older color, I think. (Googling leads me to blog posts from 2011, looks like it's from the fall 2011 Metro collection.) It's a small glitter, sort of microglitter-ish, although it doesn't seem to be a full-on microglitter. In the post I linked to above (from Swatch & Learn), it mostly looks blue, but you can see in my swatch that there's definitely some purple leanings in there as well.
Posted by Mel C at 6:57 AM No comments:

I found the pictures I took of the Kleancolor metallics swatches and I know I never posted most of them, so here goes that. I don't usually like to put this many pictures in a post, but for these I think I'll make an exception. These are pretty nice metallics if you're on a budget, though.

But I don't think that I ever showed the swatch for the only other one I've ever actually worn, which was Metallic Fuchsia: 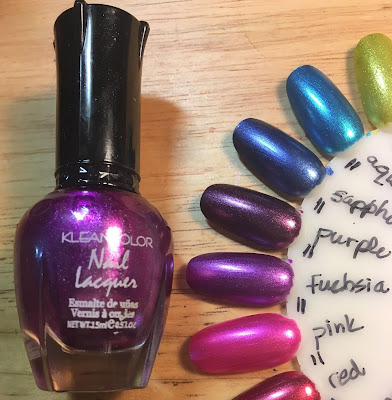 I liked this a lot, but then this is totally my color. (I would have called this "violet" myself, maybe - the pink one is closer to what I think of as fuchsia.) 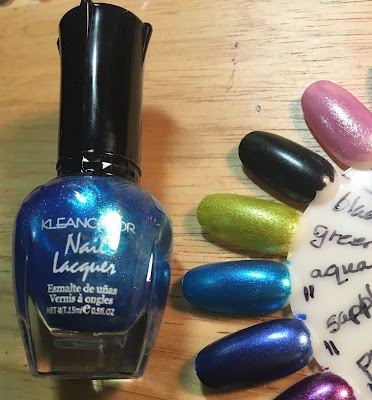 This is super-pretty, too - I should dig this one out and wear it, it's a good summer color. Then we have the darker blue, Metallic Sapphire: 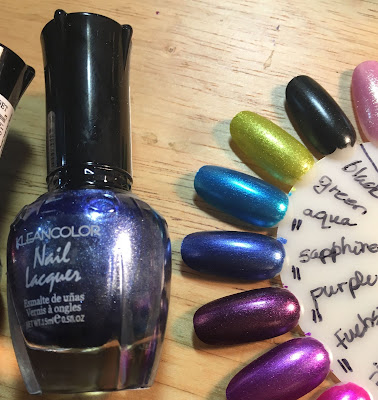 I thought I had pictures of all of these, but I can't find the picture of the purple one. If I find it I'll add it back in later.

Metallic Red is pretty, but it's not really a true red. (I don't really think they put a lot of thought into these names, really, do you?) 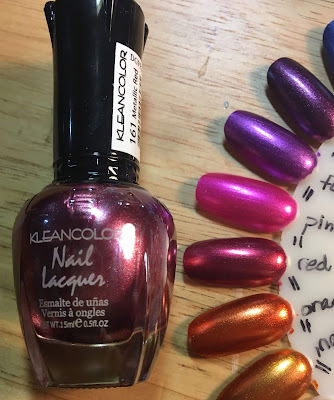 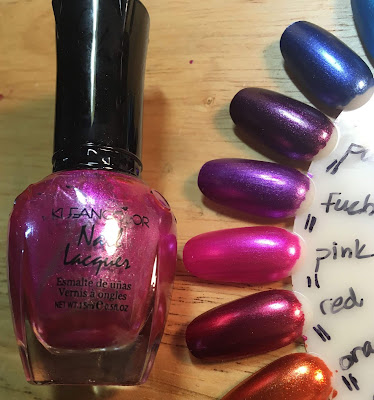 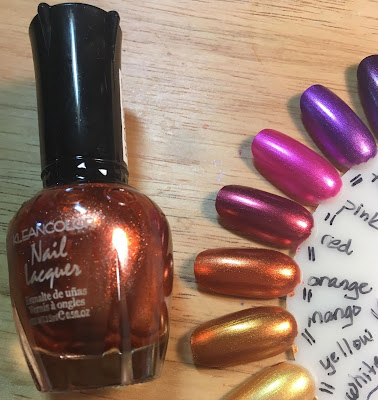 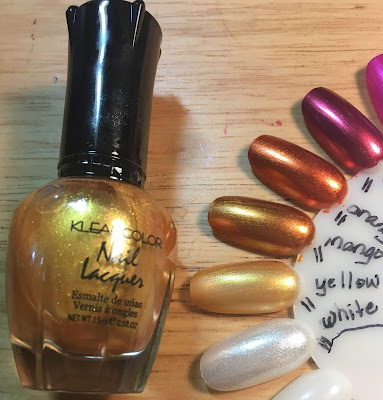 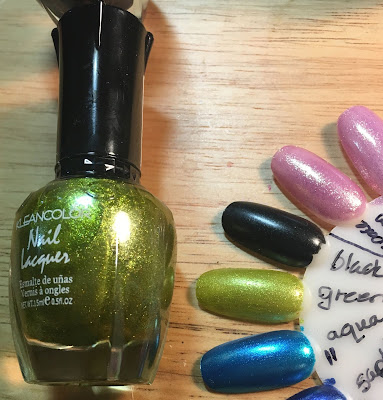 And last but not least, Metallic Black: 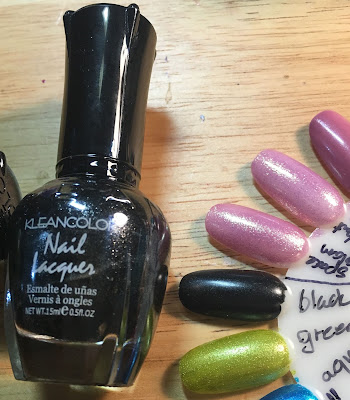 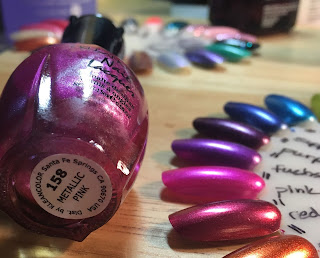 I was missing some pictures when I posted about my Boxyluxe box, and I posted it without them, but now I have some more - I don't know if anybody else cares, but it was bothering me, so here they are. 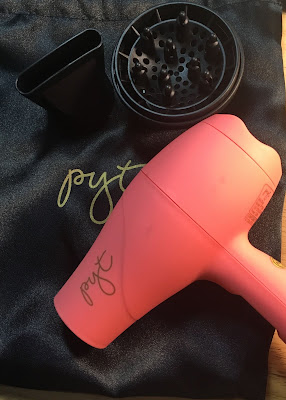 Here's the hairdryer and its two attachments. I measured and the dryer is about 5" across the top. That's pretty small, and it's very light to match, although I didn't have a way to weigh it.

And here's the colors from the Tarte palette (which is Pro Glow 3): 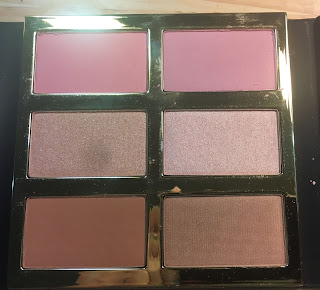 It has two blushes in the top row, two highlighters in the middle row, and two bronzers in the bottom row. I have the other new Tarte blush that I talked about yesterday, so I haven't gotten around to experimenting with this yet, but I plan to. I've never had a serious try at contouring before.
Posted by Mel C at 7:48 AM No comments:

Tarte "make your own kit" deal

I don't remember if Tarte officially calls this "make your own kit" or not, but I've seen somebody call it that, at least. If you get e-mails from Tarte or anything you probably know about this already, but I first heard about this thing a couple of years ago, I think - it's a deal that pops up on Tarte's website once in a while - like two or three times a year, maybe, and only for a couple of days at a time. And I've been meaning to try it when I saw it again. I kept missing it for a long time, but this time I did finally see it in time, so I have this little haul of goodies: 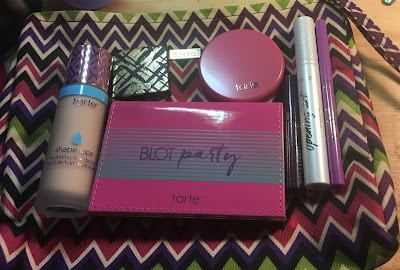 It's seven items for $63, but you can't just pick out any seven items from their website. Instead, there are seven categories and you pick one item from each - the foundation is $39 by itself, so they're not about to sell you seven bottles of that for $63, right? You only get one foundation, one lip, one eyeshadow, etc. I wanted to try their foundation and I've had sample sizes of their blush, but I've never had it in a color I like - so those two things are what I really wanted to try, and the blush is $29 so those two things are worth the price of this alone (and shipping was free, too). All this other stuff was just a bonus, for me. But I like the bag and I like the lipliner and the eyeshadow is a pretty silver, and I also like this little "Blot Party" thing which is a translucent powder and a brush and also has a pack of blotting tissues in it that fit underneath the brush. (I've been keeping that in the tote bag that I keep in the car and haul with me into work every day.) Oh, and the white thing in the picture above is a mascara primer, which I wanted to try, even though I don't normally wear mascara.

The foundation is the Shape Tape Hydrating formula one. There were other choices - that was just the one I was most interested in. Now that I've tried it, the only thing I don't like about it is that it has one of those doe-foot applicators and I don't like those, for foundation. I tried one Physician's Formula foundation that had that and I didn't like it then either. But I guess I can work around that, right? (I'm fine with doe-foots - doe-feet? - for lips and eyeshadows and concealer, but for foundation it makes it tedious to apply, to me. It doesn't give you enough of it, I guess!) 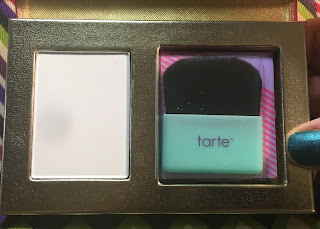 I don't have the color information in front of me for the lip and cheek products - looking at the website I think the blush color was Blushing Bride and the lip liner (they call it "lip crayon") is On Fleek. I was going to get a lipstick instead of a lip liner, but they ran out of the color I wanted. But then Sephora had some of the Tarte lipsticks on their "Weekly Wow" sale for half price so I bought the lipstick there, and I ended up with both.

Anyway, I do think this Tarte special is a good buy if you like Tarte products - which most people seem to! They are not cheap, even marked down, but the quality seems to be very good.