Hello strangers! I've been gone for a good while but hopefully at least some people will see this!

I've been trying out Beauty Pie, which I've seen described as "Costco for beauty" - I think it does give you the general idea. It's a UK company, but they do ship to the US and they ship fast, so I'm guessing they're not actually shipping from overseas. The idea is that they sell quality beauty products for really insanely low prices - like, drugstore-type prices. But you do have to join - it starts at $10 $15 a month or $99 $60 a year. (Added: The prices have changed since I first wrote this. They are definitely really pushing the annual memberships, but on the other hand if you don't mind being a member for a year, it's far cheaper than it originally was.)

So far I feel like they're delivering - I really love everything I've tried so far, at least! There is a "spending limit" that's kind of confusing, but so far I've ordered twice without running up against it.

The first time I ordered, I got a small bottle of cologne and a "sample set" with four other scents. I got Petals, Heliotrope & Ambrette, which is really nice. It's flowery without being overwhelmingly flowery, if you know what I mean. That was a 15ml bottle for about $17, and while it's still available, it's apparently a limited edition thing so if you're interested you might want to grab it soon. I'm about halfway through that smallish bottle already, so I decided to order something bigger, and this time I got Mandarin Leaf, White Cedar & Freesia, which I really think smells awesome. I was afraid to order the big bottle without knowing what these smelled like, so I do recommend trying the sample set or a travel size first, but the big sizes are really a good deal at about $22 for 100ml. They say these are made by the finest French perfumers and put the normal retail price at $125, and honestly, I believe that. They seem to be very high-quality.

(Note: I am not being compensated for all this gushing. I'm doing it entirely on my own dime, because I like it.)

Their packaging is adorable, too:

Here's my recent order inside their respective boxes: 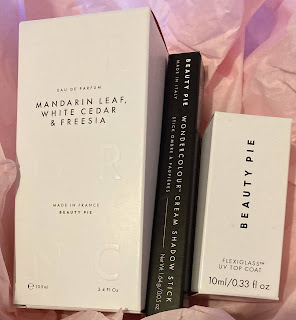 The smaller white box is top-coat, and I'll try to report back on that after I've tried it out. They do have nail polish, but it's only a small selection at this point, and I'm still on my polish no-buy so I only bought the top-coat, which I actually did need. (For some reason I have tons of different base-coats but I'm running out of top-coat.)

Later: Verdict on the top-coat after a couple of uses is that I really like it. But I don't know that it's that stunningly better than anybody else's.

Here they are out of the boxes: 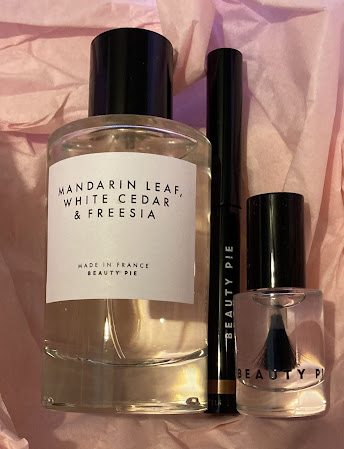 L-R, fragrance, shadow stick, top-coat (The brush in the top-coat bottle looks bizarrely huge but it's actually not, it's just your standard wide brush, I think. I opened it up to check!)

The shadow stick is a coppery color, which I like. The only other thing I've tried that I haven't already mentioned above is a glossy "Futurelipstick" which I also liked. (It doesn't have as much of a color payload as I'd like, but I bought it when we were wearing masks all the time, so it didn't seem to matter then!)

And oh! I almost forgot to say that I did indeed get a new phone, so yay, better pictures! (I traded my old 5-year old iPhone SE for a newer iPhone SE. It made an amazing amount of difference.)