The sad demise of Zoya Carter

I asked my husband the other night what color I should paint my nails. I've always done this periodically, when I can't make up my mind. (Valentine's Day is over and it's a bit early to go into St. Patrick's Day mode...) So I threw out a couple of suggestions and he said that maybe purple sounded good, and then he went to bed early and I started poking around looking for all the purples.

And boy, did I find purples. I love purple nail polish, and there's a lot of it, but before long I ran across the polish that I believe I've called my all-time favorite polish once or twice. (Here's me saying it's my very favorite Zoya, anyway, and I own something like 100 of them.) So I decided I would wear Carter.

Here's Carter in the bottle: 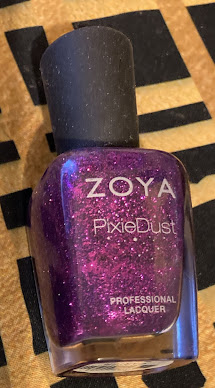 It looks fine, but this particular bottle of Carter turned out to have some issues. As you can see, Carter is a purple Pixie Dust (meaning a textured polish), royal purple with magenta sparkle. (Zoya still makes Carter, I checked on this.) And I'm not blaming Zoya for these issues, you understand, since my bottle is apparently about eight years old. According to what I have written down, it was a fall 2013 release, and I bought mine in 2014. It was in my 2014 favorites, too.

First of all, it went on a bit darker than I remember it being - which, fine, darker is more elegant. It still looked good. No, the real problem was that it wouldn't set. I remember Zoya having issues with certain top-coats or base-coats back in the day - I think it didn't play nice with Seche Vite, as I recall. Zoya was a natural brand when pretty much everybody else was not, so I think it may have had something to do with that. By the time I realized last night that it was a problem I had base-coat and top-coat on, so it's probably hard to pin down if there was some kind of incompatibility like that.

I was frustrated. It looked fine, and it felt fine if you didn't press too hard, but when I finally decided I really needed to test it, it scraped right off the nail. (And I tried again with a different base-coat, and it still was doing the same thing. It occurred to me later that I should have tried Zoya's own base-coat, but by the time I thought of that, I had given up). I finally threw this bottle away and did something else entirely.

I can still buy another bottle of Carter, but I probably haven't even worn this polish in a couple of years, so will I? Considering that it would cost $12 now, probably not.

But like I said, nothing against Zoya. Things happen when a polish is old enough to be in grade school.