I don't buy OPI much any more because it seems like they don't make as many interesting polishes as they used to. However, I was intrigued by a couple of polishes in the new fall collection, Muse of Milan, and I looked at the prices on Polish Pick and finally bought one, Leonardo's Model Color: 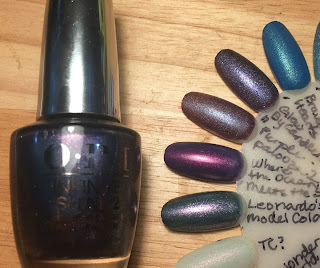 Furthermore, I sprang for the extra dollar-and-change to get the Infinite Shine version, which I have never tried before. I like it a lot and it has worn quite well, although I've never gotten the incredible wear from OPI that a lot of people claim to - I suspect that's just me. 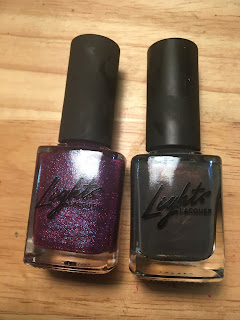 I talked the other day about the first of the two Lights Lacquer polishes I bought, Zenon (apparently named for a 90s Disney movie!), and today I'm talking about the second, Smokey Quartz.

(I said I was going to post this last week, and I duly wrote it and then somehow failed to set it correctly to make it post! Sorry about that!)

This is from the Polished Gems collection, which I think came out around the holidays last year. 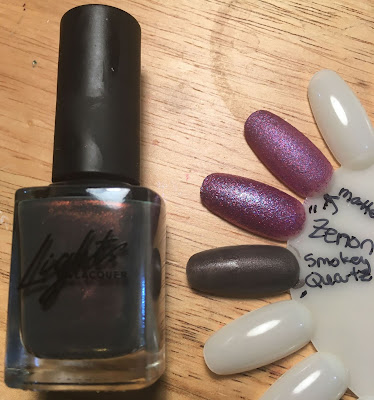 The website describes it as "a dark taupe base with rose copper shimmer." I put a top-coat on the tip of the nail on the swatch, and you can really tell the difference, here (unlike the one yesterday), but you still can't see much of the shimmer on the nail, at least in this picture. It's really obvious in the bottle, though, and I'm hoping that it's more apparent on the nail than my swatch shows. I really think this is going to be a great fall polish.


Here's a swatch video where somebody shows the whole collection - she launches right in with Smokey Quartz first thing, if you don't have time to watch the whole thing:
There's some other nice colors in here, though!
Posted by Mel C at 6:59 AM 2 comments:


This bit of my planner is months old, but I liked it and I thought I'd post it anyway:

I guess I should explain. I had a small tumor removed, and I was going to have five radiation treatments, but then they (meaning a committee, or that was the impression I got, at least) decided at the last minute that it was overkill and they cancelled it! I'm very glad this was unneeded, as you might guess. But the funky letters & bright pastels were cheering to me when I was still anticipating having to do it.

Actually this said "radiation week" - the "week" part was on the facing page.

This is in the Lifeplanner, but the letter stickers came out of a Happy Planner "megapack" book - the pastel one. (That book may or may not be discontinued, but I found copies various places when I searched. I think it was a really good deal at $20, not so much at its list price of $50.)


The 2021 Happy Planners came out this past week, and it made me kind of glad I bought what I bought already - I had bought some marked-down 18-month planners that go through the end of 2021. Not that there's anything wrong with the new ones, but I still like the ones I already have - which is the "All the Seasons" vertical book, and two horizontal ones to journal in ("Bookish" to talk about books in, and "LOLquotes" for everything else). Oh, and a skinny classic that I think is called Ink Splash, too. I do really like some of the flower and plant themes in the new planners, especially, but there's nothing that particularly makes me sorry I didn't wait.

Happy Planner always names their planners & notebooks something other than what it says on the cover: 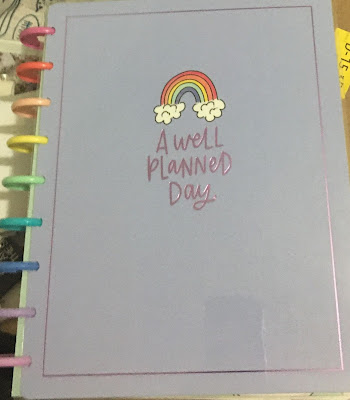 This is "All the Seasons" even though it says "A well planned day" on the front. I am very literalist sometimes, and my instinct is to call it what it says - but I'm sure they have their reasons. Anyway, "a well planned day" is totally not my actual style (in planning or in life, really), but I like the purple cover and the rainbow and the rainbow disks, so oh well, we'll think of the well-planned day thing as a goal, right? And it has adorable seasonal-themed dividers that I really love.

Added: a flip-through of the above planner!

I started to call Lights Lacquer a new-to-me brand - which it is - but it doesn't really feel new to me, because I was a big KL Polish fan. I think I have maybe around 40 polishes from KL Polish, which was also the creation of YouTuber Kathleen Lights - and Lights Lacquer is basically exactly the same, except with new colors. Lights Lacquer got underway last fall, I think? So coming up on a year ago. I had been watching as colors were released, and there were things I liked, but they're not cheap, and I was able to resist - until now! I still kept myself in control and only bought two polishes. I did a lot of looking at swatches and reviews before I decided, too.

(As I understand it from what she said on her YouTube channel at the time, the reason for the change was that Kathleen had some partners that helped her fund KL Polish, and gradually they started overruling her on issues about the running of the business. She disagreed with them so strongly that she pulled out of that agreement and started over again, with Lights Lacquer, which she has sole control over.)


So here is one of the polishes I bought: Zenon. (Since this is already getting pretty long, I'll put the other polish up separately tomorrow.)

Zenon is from a new collection, Supernova: 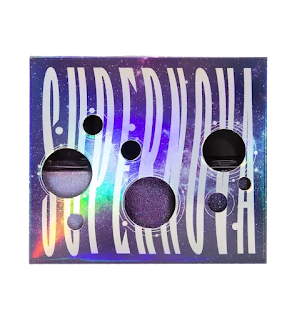 (I didn't get this box because I didn't buy all three of them, but I thought it was super-adorable so I wanted to show you the picture.)

I did get a little flat promo piece, I assume because I did buy one of the polishes from the collection: 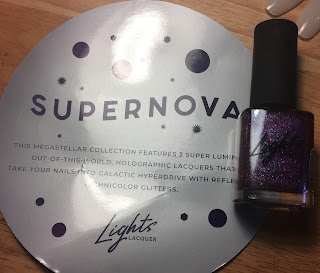 Anyway, I really like this polish, as far as what I can tell from the swatches. The description on the website is a "fuchsia pearl with an ultra fine blue-violet holographic." 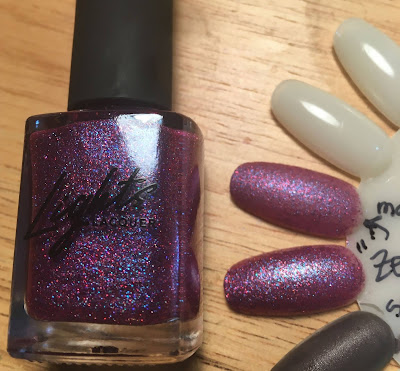 Both these swatches are Zenon, but the top swatch has matte top-coat. I just wanted to try it that way, too. The bottom one has top-coat on the tip only, but you really can't tell - or I really can't tell, anyway - where the top-coat ends.

And I just put it on my nails, so here's that too: 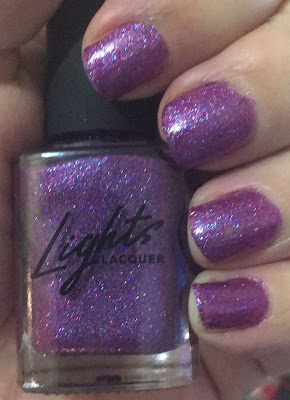 You can't see here how sparkly it is. Super pretty. (It seems to look considerably darker or lighter depending on the lighting. Compare the two pictures above!)

Happy Planners all the time!

When last we talked about planners, a few weeks ago, I was saying I was still intending to buy a Lifeplanner for 2021. Well, that plan has now changed, because I bought an 18-month Happy Planner for $12.99 from the warehouse sale that they just had, and I now have no excuse to buy a Lifeplanner next year - nor do I really want to. I put the first six months of the new planner away, and I'll re-date those and use them later, because Lifeplanners are expensive and I'm bound and determined to finish my (frankenplanned) 2020 book.

In fact the frankenplanning is part of the problem, in a way - why stick yourself with a coil-bound book if you want to be able to add pages? There are many, many disc-bound and loose-leaf planners you can use instead. I've been using various permutations of Happy Planners all year - many, many permutations, in fact, I keep buying them on clearance and changing things around almost constantly, but I haven't tried a classic vertical and I'm going to give it a try for 2021. I really don't see why I wouldn't like it just fine. (I did try the mini vertical HP and didn't like it, but that was because it was Just. Too. Small. I have no reason to think I'll have that problem with a classic.)

I know I had at least a few pictures to show, let's see what that was.

Oh right, I decided I wanted to do an election countdown. I found these date covers - presumably meant for July - and used them to count backwards. (This is just the top row of my Lifeplanner.)

I am not usually big on patriotic stuff, but I think this is pretty cute. (These are from PB Taco.)

Here is the August monthly page - I sprang for the Planner Kate sets - or at least, various pieces of the sets - for August and September. (The fruit stickers are Happy Planner, I think - I had stuck them in at some point. But the header is Planner Kate. 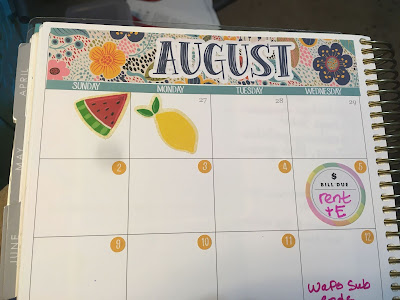 And here's a little bit of September: 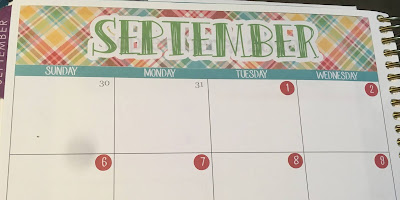 There was the plaid, or there was a version with apples - I decided I liked the plaid better. I do have some washi with the apple pattern.

All that is in the EC book. I'm doing pretty minimalist planning in the other books right now - by which I mean I'm not using a lot of stickers. I have two horizontal books I'm using to journal in (one about books, one about everything else). I have the mini vertical which is just a spending tracker at the moment, and I have my skinny classic, which I have started filling with checklists. I especially like to use that one at work. So my years as an Erin Condren girl are over, apparently. Right now I'm a combination but in January I will be a full-time  Happy Planner girl! (Happy Planner woman? somehow that just doesn't sound right.)
Posted by Mel C at 2:28 PM No comments:

I've showed some polishes from Polish 'M previously (here and here). Here are a couple more polishes that didn't make it into the previous entries.

I keep wanting to call this polish just Lettuce Play, but in fact that's not its full name. (In case you can't read the picture, it's actually Lettuce Play (In The Dirt).) 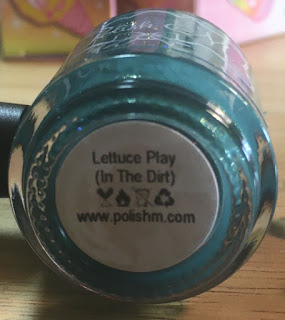 So here is Lettuce Play (In The Dirt): 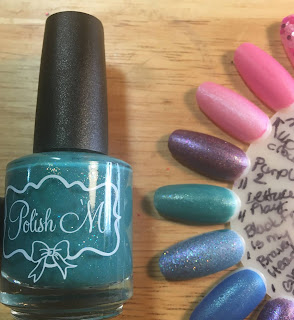 It apparently is discontinued. It's really pretty, though, and I don't think you can tell from this picture. It seems to have a variety of glitters and shimmers in it. 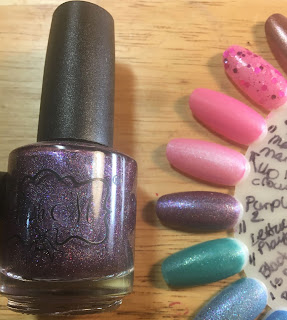 There is a whole series of Purple-A-Palooza polishes from Polish 'M. In fact, as I write this there are still a bunch of them on Polish 'M's website for $4. Honestly, I have to say I'm not completely blown away by this one, although there's nothing wrong with it - I just don't love it. But I haven't worn it yet, either. (Looking at the pictures, I might try #3 if I was going to try another one.)

I Scream, You Scream

I bought a couple of polishes from I Scream Nails, neither of which I have worn yet, and I really have to rectify that before summer is over, especially for this one, which is called Mermaids Made Me: 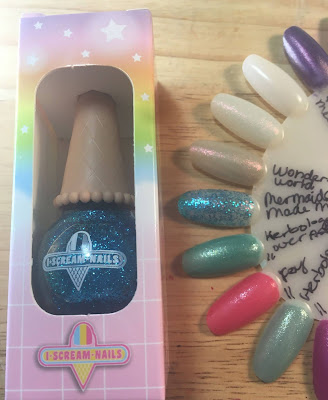 Of course the bottles and the packaging are utterly adorable. Hopefully the polish is too! This one seems to be a conventional glitter. (I don't see it on the website so I think it may be discontinued. I believe it was marked down when I got it.)

(I was thinking "why didn't I take these out of the boxes to take these pictures, but I think it was to keep the bottles from rolling all over. That kind of round bottle is not very cooperative when you want it to lay flat!)

Then the other one I got is Wonderworld, an iridescent pinkish-blue: 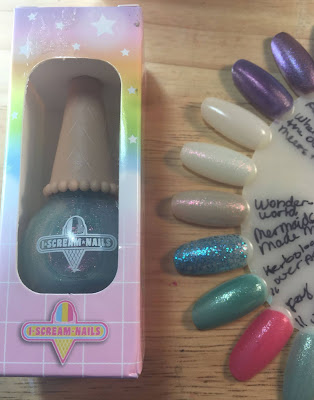 It doesn't look like too much in the swatch, does it? I'm going to have to experiment with layering here. (Wonderworld is still on the website but is currently out of stock.)
Posted by Mel C at 7:19 AM 5 comments: