Here's one other thing I've worn recently and didn't get around to posting about, Zoya Arielle: 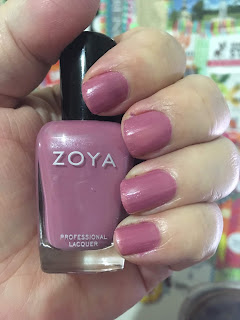 I thought it was kind of boring - although it looks pretty in this picture, really - so after a while I put another polish on top of this, Ciaté Up In The Clouds. I don't seem to have a picture of that, though. Up In The Clouds is a sheer pink that seems to have some blue-ish flip to it.

(I don't know why I keep buying this kind of mauve-ish pink. I hardly ever end up liking them. I have like five different pink cremes from KL Polish and I'm not really crazy about any of them. The only pinks I end up thinking look really good on me are the bright ones.)
Posted by Mel C at 6:46 AM No comments:

I tend to forget until too late to wear my appropriate fandom polishes to the appropriate movie, but I remembered for Endgame. This is Stone of Reality: 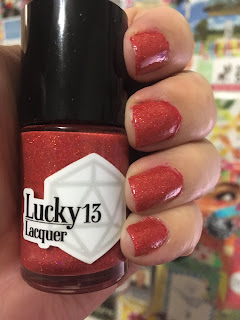 I wore it last summer and I liked it but didn't really love it. This time I decided maybe it needed an undercoat, and so I put a red creme polish underneath, and that helped a great deal. I even tweeted a picture of it from the theater right before the lights went all the way down.

This is a really sparkly microglitter. It is a "real" glitter, not a flakie or anything, so it goes on with some texture, and I assume it will be a little bit of trouble to get off. But I think it was totally worth it. (I'm toying with the idea of buying some more - the infinity stones are all still available, right now.)


And just for the record, this is approximately how many coats of polish are on my nails right now:

I say "concealer battle" but really there's no contest, unless you really really love your Nars. (Note: I'm not writing Nars in ALL CAPS every time I write it, but I will do it once (below), since they seem to prefer it that way.)

Sephora seems to be hiding the size, at least on the Tarte concealer - maybe because they don't carry ShapeTape? That information comes from the Tarte website for the two Tarte concealers. The Nars one I was able to find on Sephora's website. (I'm sure it was somewhere on Sephora's website for Tarte Creaseless as well, but it was well-hidden enough that I didn't find it and I got pissed off and switched to Tarte's website instead. It's pretty hidden there too, actually, but I went through this when I bought concealer there before and I remembered to look under "ingredients" - which makes no sense, really, but whatever. If a lot of people cared I guess they'd be putting it somewhere more easily findable.)

Anyway, I like the Nars concealer a lot, but not really any better than Shape Tape. I bought the creaseless one, too, but I haven't used it a lot so far. (At a guess, I'd say it will end up in my purse when the Maybelline one that's in there runs out.) I bought the Tarte creaseless concealer because Kathleen Lights raved about it - note that she has also raved about Jouer's concealer in recent months, but I probably won't get around to trying that one any time soon. These three are just the ones that are super-popular and that I have. (The Nars one is basically empty, though, so I'm going to be using Tarte ones until such time as I can convince myself that I need something else.)

I've probably mentioned this before, but besides the fact that I seem to buy a different brand of concealer every time, I am now in flux about what color to buy. I definitely think that the old wisdom (or not-really-wisdom) about buying your concealer lighter than your skin is stupid, but I'm having trouble finding the right color. I deliberately bought the Shape Tape darker, and I still think it's too light. I do still mix it with the LAGirl apricot one some of the time too, though, so there's that. I don't think this is an issue that's going to get miraculously solved any time soon.
Posted by Mel C at 6:59 AM No comments:

NOTD: You're Such A BudaPest (& add-ons)

I think I bought OPI You're Such A BudaPest back during the Black Friday sale from Ulta last year. The color is several years old, right? I think I remember an Eastern European collection or something like that (added: it was Euro Centrale, in 2013) - but pastels aren't generally my thing and it took me a long time to get around to deciding I wanted it. And then another while to get around to wearing it: 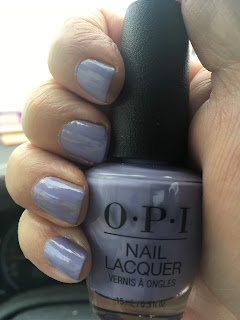 I slapped one coat on late at night, and then another one (or maybe two, because I remember griping about how sheer it was) before I left the house. I had my new NailsInc base-coat on - which hopefully I will get around to talking about soon - but I didn't have time to put any top-coat on. And then I forgot by the end of the day that I hadn't put top-coat on, and then a day or two later when it started chipping, I remembered. So, as is my wont, I started putting stuff on top of it to hide the chips.

First I picked up Ciaté Fly Away, thinking that it was a shimmer, but no, it's just a cream. I had it on a couple of nails by the time I figured this out (it was late) but hey, it matches - it's just a slightly darker purple than BudaPest is. Then I found the Ciaté that was actually the shimmery purple one - Purple Rain - and put it on top of everything. It was still kind of a mess but it was a better-looking mess, at least. I tried taking a picture of it, but it was really awful so you'll just have to use your imagination. (Bear in mind that I've posted some pretty bad pictures over the years. If I say a picture is so bad I won't use it, it's bad.)

Let's see, here's my swatches from the Mini Mani Month set:
Purple Rain
Fly Away
Purple Rain did look very nice over both of these. I'll have to try it again at some time in the future.

(If you now have Prince earworms like I do, well, I'm not apologizing for that!)
Posted by Mel C at 6:28 AM No comments:

I had gotten a sample of Smashbox Primerizer somewhere - it's a moisturizing primer:

I went through this very fast - it's a very small bottle. I really liked it, but it's awfully expensive. When I looked on Sephora's website, it said it was $42 for a one-ounce bottle - but they also had a mini size (half an ounce) for $15. So that's very strange pricing, for the smaller bottle to be cheaper per ounce than the large one - but I bought the small one. 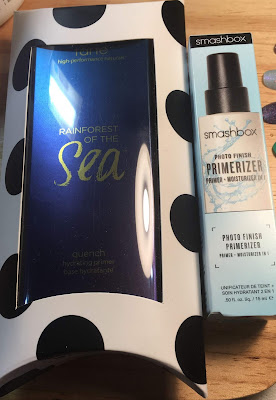 Then I was also poking around Sephora's Rewards Bazaar and I found a different moisturizing primer, called Quench - it's a part of Tarte's Rainforest of the Sea collection. I got a full-size tube of this for 500 Sephora points. (I usually mostly use my points as I go, but I had about 1000 points built up. I've bought a ton of stuff from Sephora the last couple of years.)

This is a one-ounce tube, and it retails for $32, so that's a good use of points. I haven't tried this yet, but I'm hoping it will be something similar to the Primerizer. I've started using primer over my moisturizer in the last six months or so, so combining the two would help. I'm always running late, anything that streamlines my workday routine is good.
Posted by Mel C at 7:04 AM No comments:

NOTD: Get Out Of My Space

This is NailsInc Get Out Of My Space: 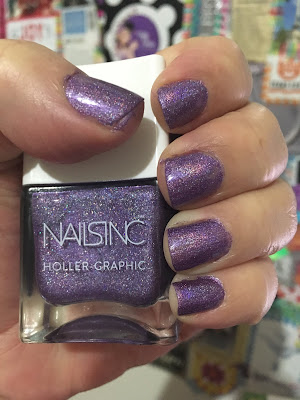 As I talked about back before Christmas, NailsInc has a whole new-ish line of holos that seem to be linear and scattered holo mixed together, as best I can figure out. I returned some of the ones I bought (just because I thought I bought too many, not because I didn't like them) but I still like the formula. They are not as flashy as a plain linear holo, but the flash is still there, it's just tamped down a little bit. Also I'm wearing NailsInc top-coat, which I really like and use a lot, with this. NailsInc is a bit on the expensive side but they're great.

Another Throwback Thursday: here is Zoya Alice, one of my favorite Pixie Dusts:

This is in 2017 - I wore it without top-coat for a couple of days and then I added RBL Bubblegum Punk, which I also really liked.

Here's a swatch I did for this combination: 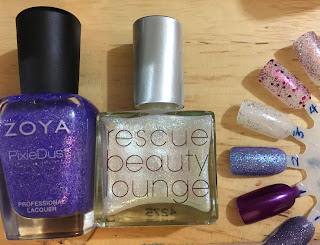 (I know Bubblegum Punk isn't something you can find easily these days, but there are a lot of shimmery top-coats out there that would give you a similar effect.)
Posted by Mel C at 7:16 AM No comments: