I think doing the "diary-style" entry (see the last one) worked well for the times when I'm making lots of changes to my nails but don't have a lot to say about each change. The purpose of this has never been to be a normal picture-heavy nail blog, but rather to document my experimenting with layers and such. However, today I do have a picture: 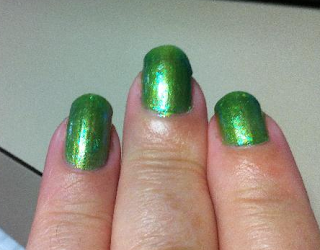 This is many coats (4, I think, but I kind of lost track) of Zoya Maisie on top of Sally Hansen Xtreme Wear Ivy League. The picture is misleading, though - it's not as emerald as it looks here, it's considerably paler than that - I would call it more of a spring green. However, what you can see, hopefully, is the slight blue shift that Maisie added, which was my purpose in adding it. Ivy League on its own is very bright and leans very yellow - in fact some bloggers have called it a lime- (or apple-) green/gold duochrome - and is not really flattering on me. So adding Maisie shifted it towards blue enough to make it more flattering to my (pale & somewhat sallow) skin tone.

(Hmm, my cuticles look a trifle swollen in this picture, what's up with that? It's not noticeable when I look at them now, though.)
Posted by Mel C at 2:25 PM No comments:

I'm going to try doing this diary-style, to do better at keeping up. It feels silly to post every little thing separately, but I can save it up and post a bit more often, anyway.

(Saturday)
CSM Black and Blue did not last all that well, for the record. I think I put it over Sinful Colors base coat - I guess is CSM really meant to be worn without a base coat? I don't know. It could just be me. I'm sure I kind of slapped it on. (It did come off very easily, though. Blues can be messy, god knows, but this one wasn't.)

So once I got rid of that, I kind of went to the other extreme from the blue-black, because I was starting to think in terms of easter-egg colors, and now I'm wearing OPI Japanese Tea Garden, a fairly light rose color, with 2 coats of Confetti Purple Pizazz over that. It still looks very pink, the Confetti just made it shimmer. I don't really own many pastels - I'm sure before the end of the week I'll be trotting out the Zoya Harmonie, because I remember from last year that I thought that was a good Easter-egg sort of color. And I can't think of many more obvious candidates from my stash, really.

(Sunday)
I didn't put a top coat over the Confetti yesterday and apparently I should have, because it was already trying to chip by last night. So I patched it up a bit and put 2 coats of Chloe on top of it this morning, but it didn't do much good because I was trying to do other things at the same time and I messed it up again before it had time to dry. It looks decent enough to make it through today (especially since I'm working and don't have much choice) but tonight or tomorrow I will doubtless be trying something else.

(Chloe over Purple Pizazz over Japanese Tea Garden actually looks pretty good, though. It has enough of the shiny now to make me quit thinking it's such a boring color.)

(Monday)
It occurred to me that I interpret "easter-egg colors" too strictly as "very pale pastels" - which, if you actually look at a lot of easter eggs, they are not, necessarily. Pale pastels just don't look good on me (as I have said many times) which is why I don't own many of them in the first place. I think I need to rethink this. I am now wearing Zoya Harmonie, which I mentioned above, but I put two coats of Purple Haze under it, which made it a bit darker than I recall it being on its own. (And a little less obnoxiously retro-frost, which is actually the reason I don't wear Harmonie more.) It looks pretty good.

ADDED: (Wednesday)
Harmonie over Purple Haze is still looking good. It looks sort of like Colorstay Amethyst, to my mind, only a bit lighter. Nice shiny pretty medium purple. I like it a lot.
Posted by Mel C at 4:53 PM No comments:

A little Zoya on top

First of all, I was looking at Fuck Yeah Nail Art, and thinking, "Y'know, I really don't love most nail art," and then suddenly there was TOTORO NAIL ART. Now that I can get behind.

What I really intended to talk about was how I'm back on my kick of layering something shiny and Zoya over everything. First, I had on Emerald City for St. Patrick's Day, and I decided to put Maisie on over that - two coats, it looked great. In some lights it was just glittery emerald, but since Maisie is actually blue-green, it picked up the blue in others.

Then last night, I finally decided to take that off (because as I learned with Chloe last summer, multiple coats of Fleck Effect wear like iron, it was barely even starting to wear), and I tried that new SH Complete Salon color that I bought a couple of weeks ago in my Walgreen's haul, Black and Blue. And I liked it, except it's kind of boring in low light, it just looks gray. In the sunlight it has a sort of a duochrome blue-black flash to it, but you can't see that in low light. And it occurred to me that what it looked like in low light was FeiFei - steel gray. So I put a really light coat of FeiFei on top of it, and now I'm happy. (At least it's easy to make me happy!) (It looks basically the same, color-wise, but now it just shimmers a little.)

(Ooh, some great Zoya layering ideas here. And I have a lot of those colors. Chloe over Roxy, I never thought of that one!)
Posted by Mel C at 2:36 PM No comments:

Pictures, to go with the last entry (which I don't think I linked anywhere so you may not have seen unless you're checking here regularly).

Rimmel English Rose - this is about 4 or 5 days in, I think, so there's some noticeable tipwear, but on the whole I was quite happy with it. 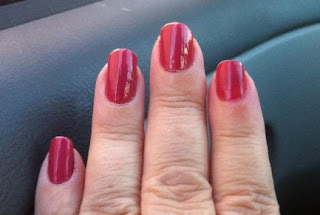 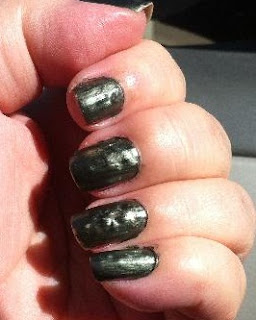 Honestly, I think in real life it looked better than this. Some of the bumpy effect is just the lighting. But it was not by any means the kind of overall magnetic pattern I wanted.

Since I'm posting this on St Pat's Day, I guess I should note that I've had on two more green polishes this week: earlier in the week I wore Zoya Irene, a mossy green, and the last two days I've had on Sally Hansen Xtreme Emerald City, which is pretty much what the name implies, a very glossy emerald.
Posted by Mel C at 12:16 PM No comments:

I've tried two things lately that were problematic: the Essie magnetics, and the Revlon Neon nail wand. I poked around and found other people making the same complaints I did in both cases. With the neon thing, it was just really hard to get even coverage. I finally gave up and just went with sort of an ombre effect where the tips were a lot darker than the rest, and it ended up looking okay. I really like the color (Ultra Violet), but getting it even is a bitch. With the magnetic, I couldn't get it even in a different way: I couldn't get the magnet to work right. I only got the all-over effect on one nail, although I eventually got a distribution of patterns that looked okay, and I ran with that. I loved the color (Crocadilly, a very crocodile-ish gray-green) so it's not a total waste even if I never get the magnet to work right. I know some of that may be a learning curve but it seemed like some of it might be the magnet, too.

I bought my first-ever Rimmel London polishes the other day because they had a package deal where you buy the Lasting Finish Pro nail polish and get the base coat/top coat for free. They claim it lasts up to 10 days, and I'm not going to make it even a week, but still, for me that's pretty good. I've had it on since Thursday, I think, and it's Tuesday now and it's just now starting to chip. So not bad at all. The color choice was not fabulous, but I picked up English Rose, which is what you would expect, an old-style (to my mind) rose-colored cream - but old-style is not necessarily a bad thing. I liked it, on the whole. It's more coral-leaning than some rose colors.

The other thing I've worn in the interim is another color from my last Walgreen's haul, the SH Xtreme Wear Pacific Blue. It's an odd color, because it does look very periwinkle in some lights, but not so much in others. So it shifts from a purple-leaning blue to a more pure cyan-ish blue depending on the light. But I liked it. And it's very pigmented, a near one-coater, although I ended up using two. The texture of the wet polish really felt more like paint to me than like lacquer.

ADDED: Pictures of the Rimmel and the Essie in the next entry - here.
Posted by Mel C at 7:17 PM 1 comment: