Today's manicure:
...and I haven't put top coat yet but I suppose I should - but I think I'll wait until later and let this EIGHT coats cure first! Wow that's a lot of nail polish, but it looks beautiful. Still very very sparkly even with three coats of Paloma.

(Last week I stuck with Dancer Is the Best Reindeer all week. I redid it once, and this weekend I just patched it up and made it last. But I decided I didn't want to do that again today.)
Posted by Mel C at 10:41 AM No comments:

"Dancer is the Best Reindeer"

I'm gonna have to check that title before I post, because I didn't even really look at the name on the bottle again since I first bought this. It might be Prancer, not Dancer, but "Dancer Is the Best Reindeer" is what the name is, in my head. (And I googled and I was in fact correct.) Anyway, this nail polish is definitely from Wet n Wild's Fast Dry line, and I bought it a month or so ago at either the grocery store or at Walgreen's - I've already forgotten which - because I thought it looked like something I would really like. And boy, I do. I'm a little bit in love, actually.

I put it on last night before I went to bed, and this morning I rolled over in bed and took an iPhone picture, because the light was streaming in and I thought that might be the best picture I was likely to get without going outside (so bear in mind that this has not been cleaned up at ALL): 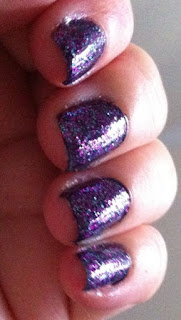 ...but it's enough for you to get the idea, anyway. Purple glitter with some blue mixed in. It's so thick I wasn't even entirely sure what color its base was, but I'm guessing looking at my cuticles that it's clear. It seemed like the kind of thing that would benefit from a dark undercoat, so I picked up something inky - I think it was OPI "Who are you wearing?" - see below for more on that. (ADDED: I forgot to say, and it was late and I'm not 100% sure about this, but I think this is 3 coats of the glitter. With top coat.)

Here's some other people's swatches, found on my google search:
A polished life
Allura
(The first of those went the same basic way I went, and put a black underneath. The other one has swatches with no undercoat, and I think from that that I definitely did the right thing!)

And in case you don't know what "Who Are You Wearing?" looks like - I honestly couldn't remember - or tell - last night if it was a blue or a purple but I didn't really care at the time either: here you go. (They call it a blurple in this link - I hate that word but it is useful). I'mna have to remember to wear it more often, in any case; it's pretty.
Posted by Mel C at 12:45 PM 3 comments:

Just so you know, Bet On Red seems to wear quite as well as any of the other reds in my regular rotation. (Reds seem to be a bit on the chippy side anyway. Anybody else notice that?) I kept the manicure I described in the post below until I destroyed it changing the CO2 canister at work on Sunday - very unfeminine work, that - and actually I slapped another coat of red on and made it go through yesterday, too, but I did finally take it off last night and start over. What I'm wearing now is almost identical, though, except I have two coats of Bet On Red and no Kaufda, and also I picked up a different top coat this time - Revlon Top Speed, which I'm almost certain is several years old but seems fine. In fact, I smudged the first coat of top coat up a little (it didn't dry fast enough for my superpowers of smudging!), and so I put a second one over that, which means it's nice and extra-shiny.
Posted by Mel C at 6:02 PM No comments:

Well, I tried Kaufda over red - RBL Chinoise, which I don't really care for by itself so I tend to use for purposes like this - and it did punch up the red factor of Kaufda, so it was a success as an experiment. But I seem to be out of the orange mood. (I should probably just put Kaufda up for the year, in that case, because fall is normally the only time I'm at all interested in wearing orange.) I looked at the result and went, "Meh," and promptly covered it up with Milani Bet On Red, a shimmer. Actually I might should have anticipated this - we're well into December now, as much in denial as I am about that - and I have a long history of wearing red a lot in December and right through the winter.

So in summary, what I actually have on my nails is (1 coat of each):

Seems to me that I didn't think Bet On Red wore very well when I wore it before. I'll try to remember to report back on that.
Posted by Mel C at 12:39 PM No comments:

Since I haven't posted here in a few days, I thought I would just tell you (in case anybody is actually waiting with bated breath to hear) that I am back to Chloe over Jem this week. I've had that on a few days, and it's starting to wear a bit now, and I am toying with the idea of trying bright red under Kaufda next, to see if it'll punch up the red tones a little more. I'll report back on that if and when it happens.
Posted by Mel C at 5:56 PM No comments: