Okay, it's not quite neverending - but this was a really big box. This installment is the dark pinks. 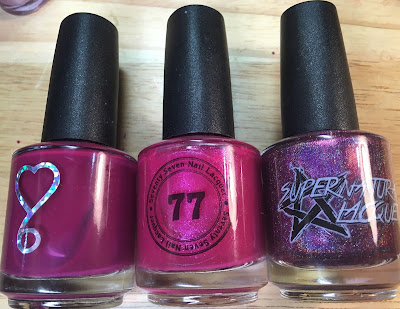 The middle one is noticeably not as dark as the other two, but these are all darker than the other ones we've looked at from this box.

They are There Will Be Time from 6 Harts, Fight Like Hell from 77 Lacquer, and Keep Calm and Fight Cancer from Supernatural Lacquer.

There Will Be Time (from 6 Harts) is the lone creme from this box: 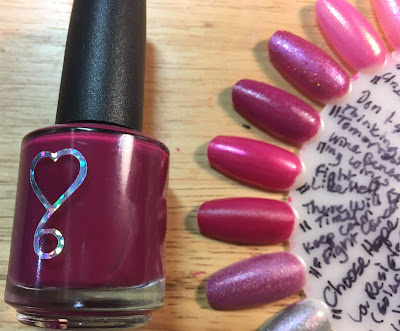 The Cosmetics Sanctuary post that I've been getting my descriptions from just calls this one "a deep purple leaning fuchsia creme" - I haven't tried this one yet other than this swatch, but it looks very pretty. 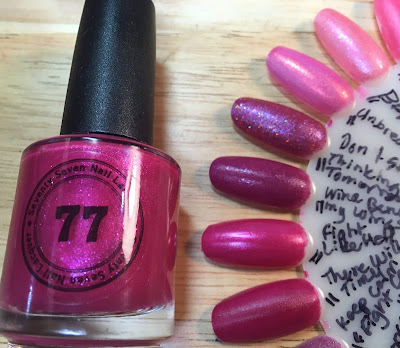 "a medium raspberrry pink crelly base with copper shimmer and crimson shimmer flecks" - I haven't worn this one yet either, although I've picked it up and admired it a couple of times.

And then we have Keep Calm and Fight Cancer (from Supernatural Lacquer): 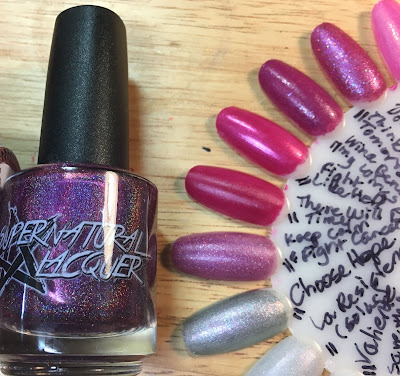 "a blackened magneta with linear holographic, holo micro flakes and purple to red to gold multichrome shift." I wore this one on my thumbs when I did the pastel skittles on the rest of my fingers. I really liked it.

Still a couple of installments to go - the coral-leaning pinks and the things that don't look very pink at all (although apparently they do have pink in them, I'm told). Will I get them all up while it's still October? It's gonna be a close thing, one way or the other.
Posted by Mel C at 6:44 AM No comments:

The middle ground of BCA polishes

More indies from the Breast Cancer Awareness box - this bunch is the medium pinks - not pastels, which I've already shown, and not coral-leaning and not very dark - those sets are still to come. 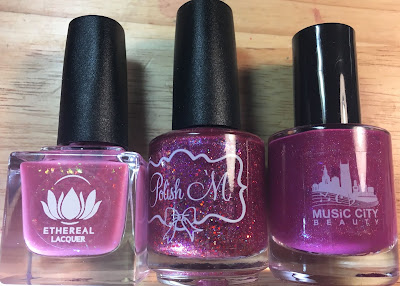 So as you can see above, these are Hope from Ethereal Lacquer, Don't Stop Thinking About Tomorrow from Polish 'M, and Wind Beneath My Wings from Music City. 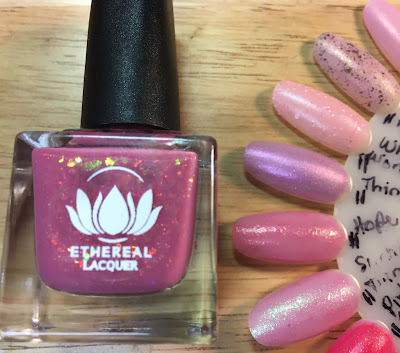 (Again, I'm using Cosmetics Sanctuary's descriptions - which I suspect may have come from the makers of these polishes, since they're quite detailed!) "a dusty rose pink with iridescent chameleon flakes and red to green aurora shimmer" - I haven't worn this one yet, but I intend to because I really like the swatch. 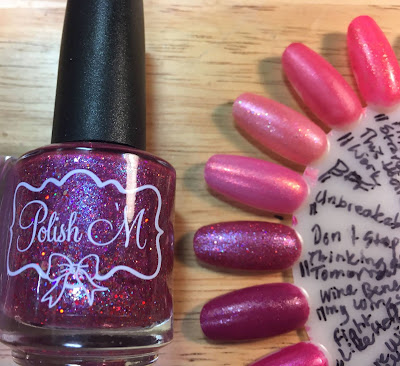 "a deep fuchsia with iridescent shifting flakes, gold flakes, red holographic glitter and a very subtle aqua flash" - again, haven't tried it yet but definitely want to. It almost appears to have some texture to it in person. (I almost decided to try this earlier today before settling on the one below.) 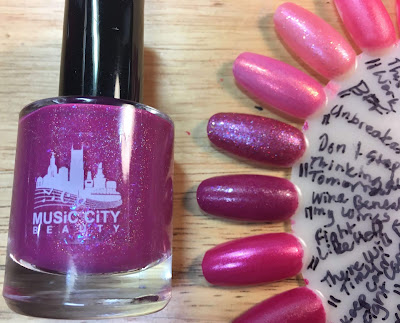 "a magenta creme based scattered holographic with blue fantasy flakes mixed in" - I have this on right now, and "magenta" is exactly the word I would have picked. Under the overhead light in my living room, it looks almost red. But I haven't seen it in daylight yet. The holo & flakes are also not terribly apparent right now, but again, sunlight will presumably help with that.

I just looked at the Music City website and all of their polish names seem to be songs. (I just thought that might interest somebody!)

Here is Wind Beneath My Wings on my nails (not the neatest application I've ever done, sorry!) 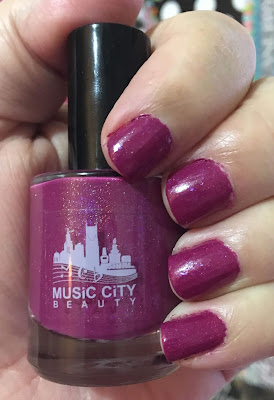 I like it - but then darker pinks are totally my thing so I figured I would.
Posted by Mel C at 6:59 AM No comments: 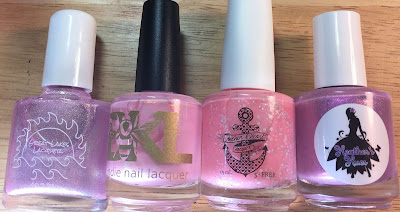 This is the pale-colors contingent out of my Breast Cancer Awareness month box: Great Lakes Lacquer Never, Ever Give Up Hope, Bee's Knees Third Time Is The Charm, Anchor & Heart What A Wonderful World, and Heather's Hues Think Pink.

I actually have three of these on right now as a skittles manicure, along with a darker one and a more silvery one. I like it. (I thought the Anchor & Heart one was too close in color to the Bee's Knees, so I picked out some other things where I thought the difference would show up more. Although actually I think it's different looking enough that it probably would have been fine, really!)

So let's see, the Colores de Carol that I'm holding in this picture is the one polish that's not in the pictures above. It's called Valiente. 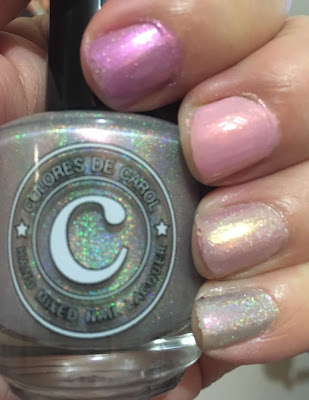 Top to bottom, these polishes are Think Pink, Third Time Is the Charm, Never Ever Give Up Hope, and then Valiente on the pinky. And I put a coat of KL Polish Wishbone under all of them - even my thumb, which was much darker. Wishbone is sort of a pale taupe/tan color. Not that close to white at all but light enough to look fine under stuff like these colors. I'll talk about the color I had on my thumb (and also the one on my pinky) later on, but for the record the thumb was Supernatural Lacquer's Keep Calm and Fight Cancer. It's a nice dark magenta-ish color.

I'll keep using the descriptions from that blog post I linked to last time, because I am not good at figuring out everything that's in a polish like some people seem to be able to do! That post was from Cosmetics Sanctuary.

Great Lakes Lacquer Never, Ever Give Up Hope: 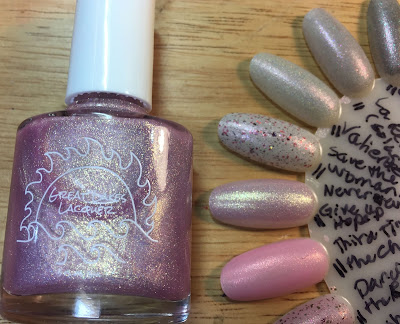 "
"a petal pink linear holographic with a strong gold shimmer that shows slight shifts to blue and green" - it's very pale, so much so that with Wishbone under it, particularly, it read as very neutral, almost as a pale rose-gold rather than pink. 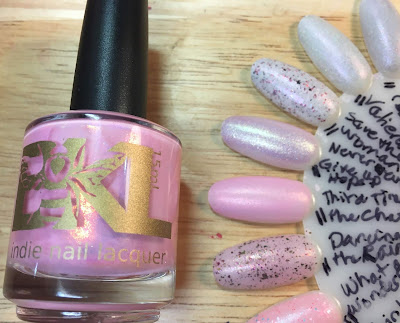 "a baby pink creme base with red to orange to green shifting aurora shimmer" - this one is what I would call a true baby pink, but it has a noticeable shimmer (even if you can't see it in the picture above!).

Anchor & Heart What A Wonderful World 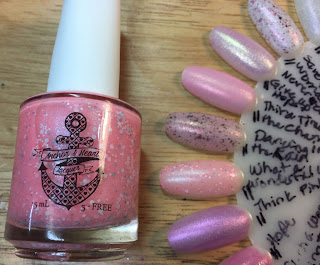 "a bright coral pink crelly with blue to purple aurora shimmer, and various sizes of glitter in pale mint, white, pink, and teal" - this is the one I didn't put in the skittles mani, because it was too similar to Third Time's The Charm, but since it has noticeable glitter in it, it doesn't really look the same at all. 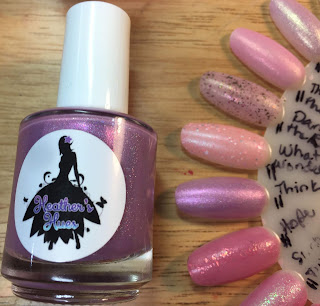 "a ballet slipper pink based scattered holographic and a strong iridescent shimmer that shifts from blue to pink to gold" - this one is my favorite of this bunch, although again, I like them all. I think I like it because it reads as slightly purple (maybe that's the blue shift that causes that).

Oh, and these were all new brands to me except Great Lakes Lacquer, which I had bought one polish from previously.
Posted by Mel C at 7:08 AM No comments: 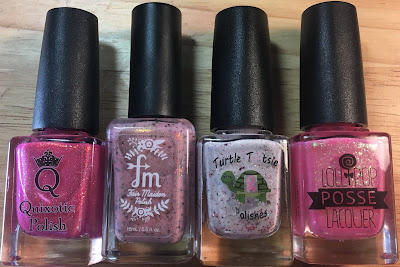 As I said previously, I bought a large box of indie polishes themed for Breast Cancer Awareness Month. These are limited edition, so while it's possible you may be able to find a few of them on individual brand websites, many (maybe most) of them are probably not findable. The thing I love about this box is that there are no cremes - it's all shimmery and flaky and such. (Correction: there may be one creme, but even that one is shiny enough that I swatched it without classifying it as a creme in my mind!)

I decided I would wear these all month during October. There's no way I will get around to wearing all twenty of them but I did wear four in the first half of the month (which are in the same order I wore them in both the picture above and the one below).

So the first one I wore was Quixotic Unbreakable, then Fair Maiden Dancing In The Rain, Turtle Tootsie Save The Woman NOT The Boobies! (ha), and Lollipop Posse Such A Wonderful Thing To Love. I liked all of them but I'd say the Lollipop Posse is my favorite so far. Dancing In the Rain was probably my least favorite but I think it needs something underneath it so I'll have to try that one again later. (I'm guessing many of the pale ones would benefit from undercoat - actually I think all of these except the Quixotic would.)

A lot of these brands in this box are ones I have not owned previously, so I'm happy about getting to try lots of new brands. The only one of these four I had tried before was Lollipop Posse.

Below are wheel swatches (and nail swatches, at the very bottom). I think all of these are two coats on the wheel, and 3 coats on my hands - that's one reason I'm talking about undercoats. Also I just found somebody who had a press sample of this box - Cosmetics Sanctuary (hereafter referred to as "CS." She has much better-quality pictures than mine, and also much more detailed descriptions. (Actually, if you follow the link and look closely, she also had the bigger-size box than mine. Mine had all of the polishes except the Cuticula top-coat, but none of the non-polish items.) 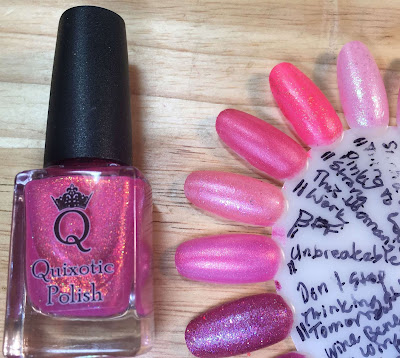 This is super-pretty. CS's description was "a vibrant strawberry pink crelly based scattered holo with orange to pink shifting shimmer." It's very shimmery, right up my alley.

Dancing In The Rain from Fair Maiden: 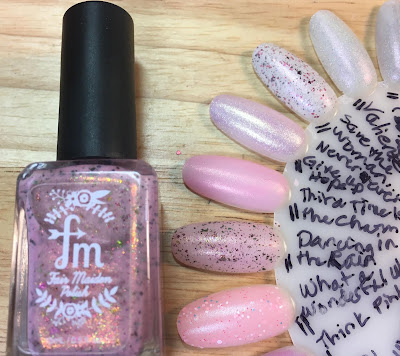 Pale pinks tend to not be super-flattering on me, so that may have been my problem. I really like this, though. CS's description: "a delicate light pink crelly base with ultrachrome chameleon flakes that flash all colors of the rainbow, and fiery aurora shimmer."

Save The Woman Not The Boobies from Turtle Tootsie: 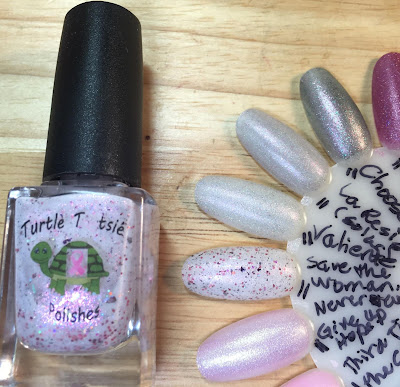 The fact is, I'm a sucker for just about anything with flakies. I'm not usually really big on white polish, but I liked this one a lot. (CS's description: "a white crelly base with pink shimmer, pink flakes and assorted pink micro glitters.")

Such A Wonderful Thing To Love from Lollipop Posse: 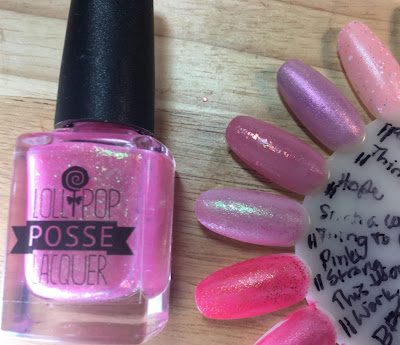 Like I said, this one is my favorite so far - but it is really sheer so be ready for that. I used three coats and there was still noticeable nail line. CS's description here: "a rose pink crelly filled with green aurora shimmer and a combination of iridescent flakes that shift in shades of purple, pink, and green."

I do have swatch pictures of all of these now so I'll try to get the rest of the pictures up while it's still October, at least. It'll probably be in several installments.

(Also, I'm at home sick today and I'm ready for a new polish and I'm contemplating a skittles thing, so I can use five different polishes. We'll see how this goes.)


Oh, I almost forgot the on-the-nail pictures. Several of these have been up on Instagram already, but not all.


Such A Wonderful Thing To Love: 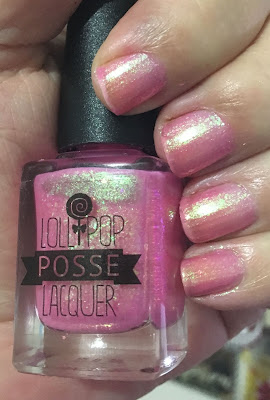 Save The Woman Not The Boobies: 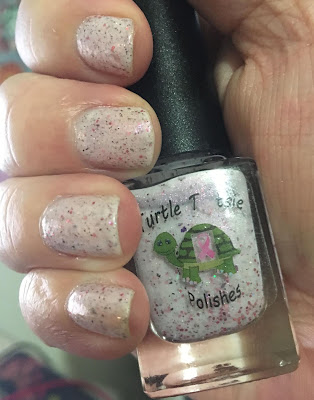 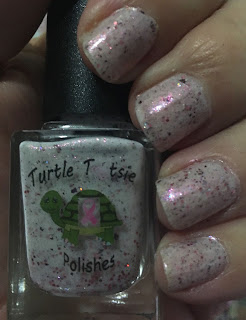 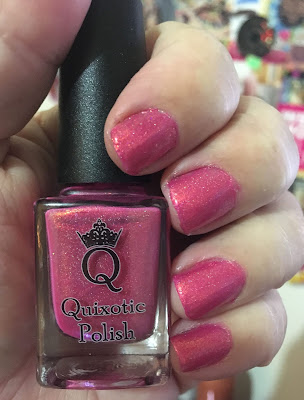 Dancing In The Rain: 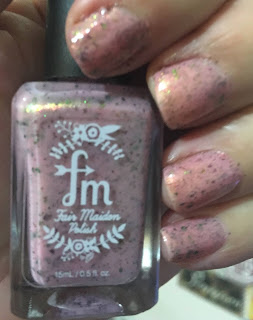 Here's a preview of what I bought lately: 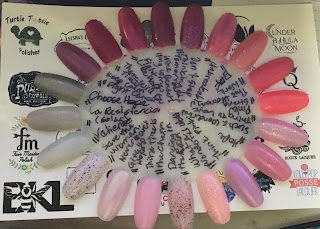 This wasn't taken in good light, so most of these are much prettier than they appear here, but this is all 20 of the polishes from the 2019 Breast Cancer Awareness box. (There was an even bigger version that included some things that weren't polish, but I just got all the polishes.) So there will be many swatches and nail-of-the-day posts upcoming, assuming I get around to actually taking all those pictures. The first one I wore is already up on Instagram, though (here).

(I mostly wanted to put this picture up to show you what a good job they did at getting 20 entirely different colors into the mix!)