Here is the picture of Zoya Taryn that I posted on Instagram last week: 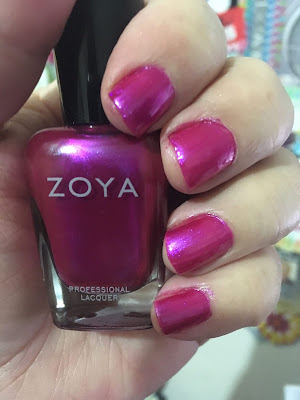 My spreadsheet says I bought Taryn in the Black Friday sale last year. Apparently I never posted a swatch of it, either, so that's below. This picture does not do justice to the goodness of Taryn - it's one of those fuchsias with a blue shift. I had (& possibly still have) an old Zoya that did that - Lilith, I think? - but it's long-discontinued. And anyway, this one is better. Zoya describes it as "a fiery fuchsia micro-irredescent shimmer with blue undertones" (did they just spell iridescent wrong?). Highly recommended. 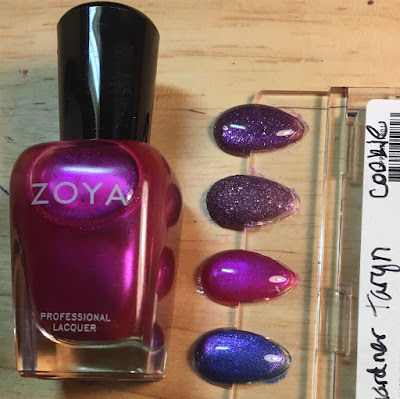 (Huh, I did the two Pixie Dusts I bought in this order, and I did a NOTD post when I wore Gardner, I'm pretty sure, but I don't seem to have a swatch post for it either. I'll have to fix that.)
Posted by Mel C at 6:36 PM No comments:

They call this "BoxyLimited: Skincare" so that you'll get the idea that it's limited edition, I guess. I've already forgotten how much this cost, exactly - under $50, as I recall. Since there's one item in here that's worth well more than that by itself, there's not going to be any way that I don't get my money's worth, here. There are a couple of items I'm less likely to use as much, but that's always the case. 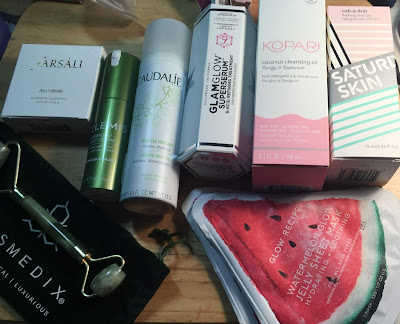 Left to right and top to bottom: 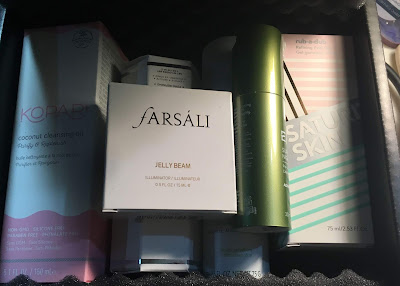 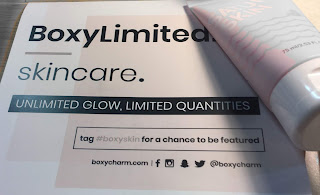 I think I mentioned this before, but this is something I got for my birthday - the palette from the Ulta Avengers tie-in collection. Rob and I had gone in Ulta six weeks or so ago, and this was already there then. I don't think I said much more about it than "Ooh, cool," at the time, but he went back later and got it for me. He knows how I love the MCU movies. (We went to see Captain Marvel a third time this weekend, since we'd already seen Endgame twice, although we'll probably do Endgame one more time while it's still in the theaters, too.)

The palette doesn't have the most striking cover in the world... 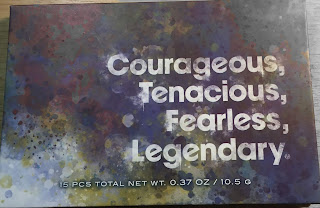 There are plenty of logos on the inside, though. It's got a pretty interesting selection of colors - I mean, it's got the usual neutrals, but it's also got some brights. I don't have a huge collection of palettes, though, so I'm maybe not as picky about color selection as some of you might be! 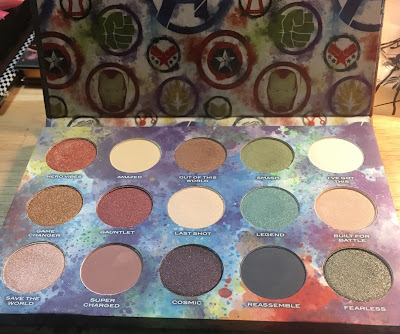 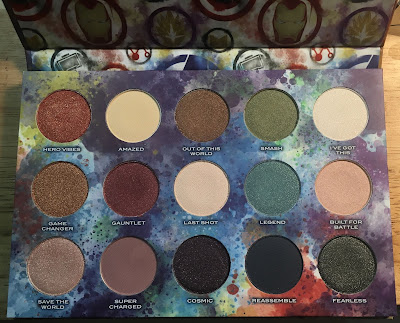 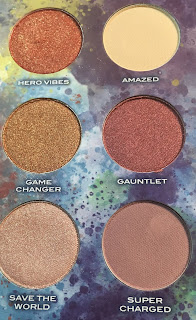 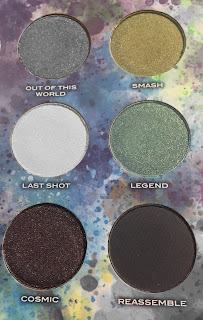 Celia & To The Stars

These are last two KL Polishes I have that I haven't shown swatches of already: 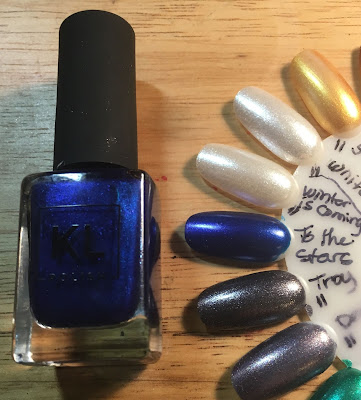 Metallic dark blue, very pretty. It may be a while before I get around to wearing this one but I'm sure I will, eventually. (It's from the winter collection last year, and that seems like the time of year I typically feel like wearing this kind of color!) 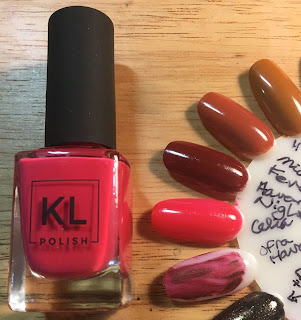 a deep hot pink creme. I'm a fan of hot pinks, so can't go too wrong with those.

I decided to resubscribe to Boxycharm for a few months, mostly because they were doing a special skincare box that I wanted to try out, and also I figured while I was at it I would get a Luxe box. So far I've got two months of regular boxes and the skincare box. If you're not familiar with Boxycharm, they are boxes that give you full-size makeup items every month. You pay around $20 but you get products worth many times that.

The theme for this month is Make Waves, and here's what was in the box: 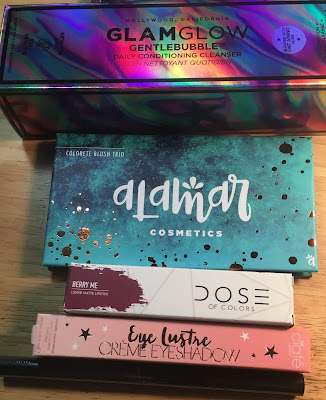 top to bottom:
That's over $100 total retail. Here's the things out of their boxes: 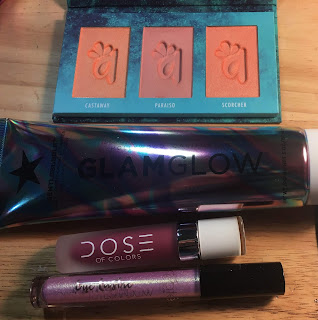 These cheek colors look awfully warm for me, but I'm intending to try them out before I go and give them away. 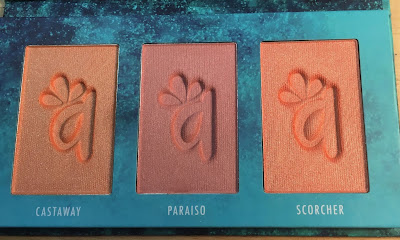 The Dose of Colors liquid lipstick, on the other hand, is totally my color. 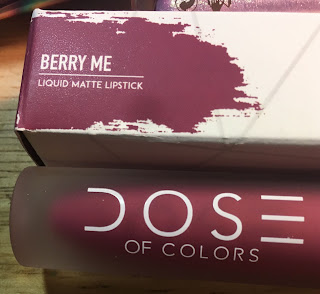 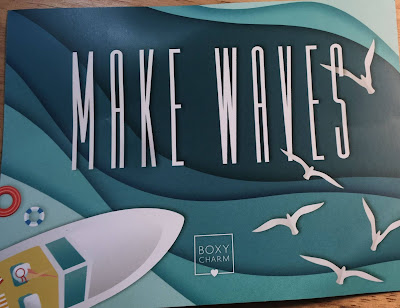 Added: Alexandria's unboxing video; mostly she has the same stuff except one item is different and some colors are different. (I'm really really glad I got "Berry Me" lipstick rather than the neon-ish one she got! However, I think I like her blush colors more!)
Oh, and Kathleen's too, because I found it while I was doing this:
I had not taken in that the blush trio had stuff printed on the back - apparently Kathleen got "Fair-light" which is the same one I have. I'm guessing Alexandria got a darker version, maybe.
Posted by Mel C at 6:24 AM No comments:

Cologne? Perfume? this is about the scents that you wear on your body, in any case.

I'm super-picky about scents. If I'm wearing perfume, I like something very, very light. My sister gave me a bottle of Givenchy perfume a few years ago when she was working at Neiman's, and that's basically all I've been wearing for the past two or three years. (Apparently I got it for Christmas 2015, so it lasted for three years.) But it's finally empty, so I'm going to have to find something else. 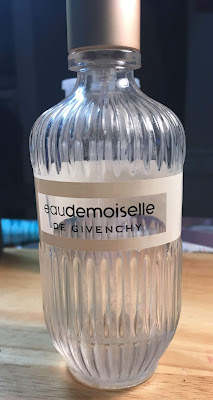 This is EauDemoiselle, and I've poked around and I can't really find this exact perfume any more. If you pay any attention to perfume, there's this trend lately where all the perfumes have different versions, and that's what seems to have happened to this one - I see versions on Sephora's website called "Angelic" and "Extravagant" which come in similar-looking black bottles (but are considerably more expensive than what I remember thinking this was). So I'm probably going need to find something else, because I don't think I'm willing to pay $150 for more of this, even if it turned out that I like these new versions.

(I've poked around some more and I see some "tester" bottles - which is probably what this one was, too, I've guessed - for pretty reasonable prices on eBay. Am I willing to do the eBay crapshoot? I'm going to have to think about that. The seller does have a good rating, and it might be less of a crapshoot than trying something new, actually. When I buy something I'm sure I'll show it here!)


Meanwhile, there's my husband. Rob didn't always care much about cologne but over time he's gotten where he wears it. Last year I bought him a bottle of John Varvatos stuff, and he used that up a while ago and since then he's been using some of those rollerballs and other samples that I had. He used that little Black Orchid rollerball I talked about a while back, and then I had an old Nirvana Black one that I never remember to use, too - Rob doesn't seem to care whether it's men's or women's as long as it doesn't smell too super-floral or sweet. Our anniversary is in May and so I got him a bottle of D&G Light Blue, because I knew it was something he had had before and liked, while the Sephora VIB sale was going on. We'll see how long this one lasts. 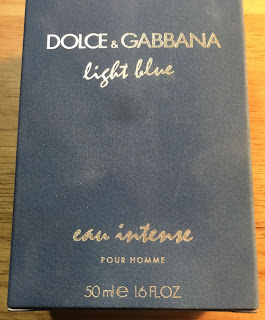 @jessface90 wrote up this tag about discontinued indie brands - I'll link her video at the bottom.


Rescue Beauty, Cult Nails, Chick Polish - I have quite a few RBLs (I counted, I have ten), I have ONE Cult Polish (which is black but it's an especially nice black, with a rubbery finish), and a handful of Chicks. I'll put some pictures below.

2. What is a brand that you never got the chance to try?


Lots of these, but especially... hmm, well, I was going to say NerdLacquer but apparently they are back! Also Candy Lacquer, for those gorgeous glitter combinations.

3. What is a brand that you tried at the last minute?


Wicked Polish had been gone for a while and did one restock, and I got a polish from that one. I'm not sure if that was "last minute" or "attempted comeback" or what, but they were gone again the last time I checked. (I have a list for this, btw, but I haven't updated it lately!)


Chirality was my first, maybe 5 or 6 years ago? I bought 3 minis, all holos. (They were also the first holos that I ever bought.)

5. What is a brand (or 3 or something) that you forgot about?


I have one Black Cat Lacquer polish that I really like - they still have a website but everything on it says "sold out." 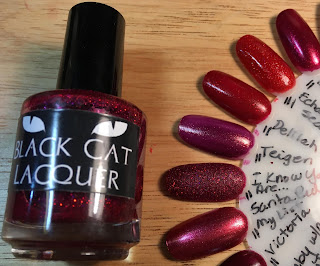 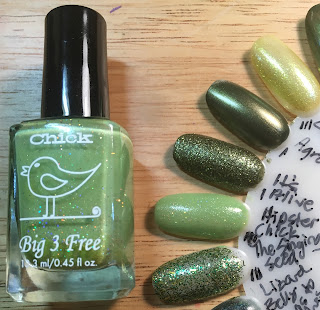 I used to complain a great deal about Chinoise, because it was $18 and it looks exactly like the rest of these reds, but it is a very nice red: 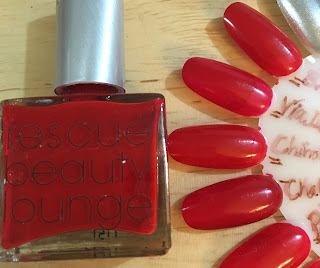 This is RBL Pretty Gritty, which I think I called my favorite polish of... some year or other. (It was 2015.) 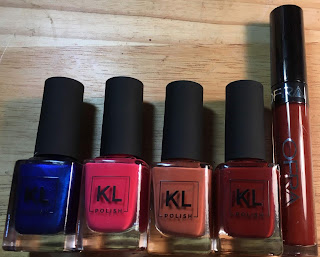 I think I said that my last KL Polish order would probably be my last, but... no. This might or might not actually be my last order, I don't know - but after this I'd either have to be buying backups or buying things that I never thought I'd want, because I've bought everything that I care about having that isn't already sold out again. They did one restock and that's supposed to be the last one. They don't seem to be in any hurry to get things shut down completely. (Meanwhile, Kathleen is already selling some assorted merchandise, as in t-shirts and stuff, and planning a new polish line - "Lights Lacquer" - which she will have total control over.)

I don't have all the swatches right now for these four polishes. The two I don't have are the first two, To The Stars and Celia. But here is the KLPxOfra set, which came with an Ofra liquid lip as a bonus.

This one is Miami Fever: 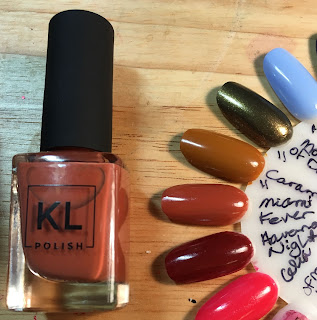 I'm not sure this will be flattering on me, but it's a pretty color - sort of a light brick color. (KLP's website calls it "terracotta.")

And then the other one is Havana Nights: 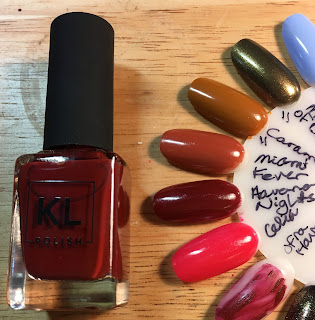 which is a deep brick red. (As of now, this set and the two individual polishes are still available.)

The lip color works on me, which I assume means the nail color will as well. I had one spot left on the wheel, so I smeared some liquid lip stuff on it: 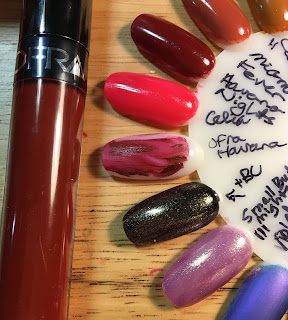 This may just be the color being wacky in this photo, but notice how on the wheel it looks much more berry-toned. I think that part is more or less color-correct and the part where the color is funky is the tube. Anyway, it works on me if I don't put it on too heavily.
Posted by Mel C at 7:01 AM No comments:

April is my birthday month, and if you're a Beauty Insider at Sephora (which you should be if you shop at Sephora at all), you always get a little birthday gift. I'm still at the VIB level, at least for this year, so I got some extra options. There were one or two little sets, or there was the option to just get Sephora points instead of picking from their designated birthday sets. I'm never in love with their picks, really, so I looked at the options and went in the end for the 250 extra points, as I figured I would. Then I looked at what was available in the Rewards Bazaar and promptly spent the whole 250 points on samples - two 100-point skincare samples and one 50-point one. I also bought this Nails Inc base-coat and treatment, which I really like. It makes your nails feel really good.

So we have a Sephora moisturizer (which was the 50-point one), The Ren Evercalm mini which is my very favorite moisturizer to carry in my purse, and the Lancome Genifique which is basically a serum (they call it a "youth activating concentrate"): 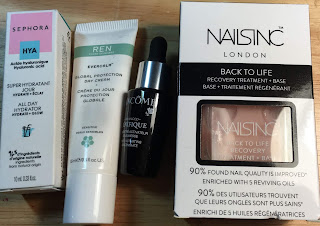 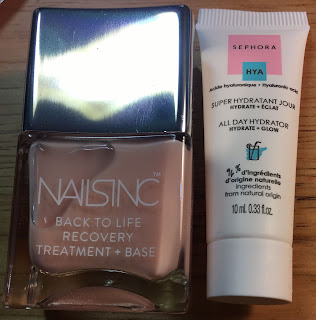 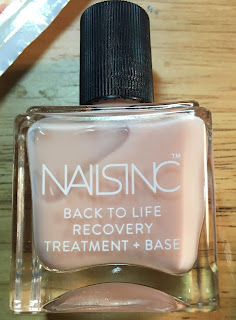