This polish is from Polished Gamers Box (polishedgamersbox.com*) from - well, I'm not sure what month. It came in September so I guess it was August, because they tell you there's about a 4-week delay from when you order. Polished Gamers Box is not a "box" per se, not as I think of polish boxes anyway! I think they started out as a set you could get each month and that's why the name. But now it's more like Polish Pickup - it goes up for a limited time each month and there's a theme and at least some of the polishes change from month to month to go with the theme, but you buy the polishes individually. I think the window for PGB is the 15th to the 20th but I can't swear to that.

So whichever month this was, the theme was The Witcher, and this is A Bard Day's Night. It's described as "a deepened plum with shifting shimmer and color shifting flakes with flashes of violet, pink, red, gold, and green" - and it doesn't say so but I would describe it as having a jelly base. It's pretty sheer on the first coat, and I ended up wearing three coats, but honestly, it was wearable with two. It was amazing how much it deepened on the second coat. Just so, so pretty. 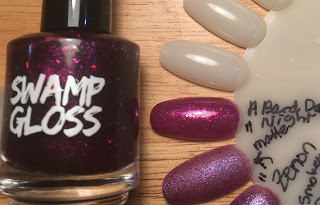 This was my first Swamp Gloss polish (swampgloss.com). I knew they existed but they don't seem to do PPU, which is where I do a lot of indie-shopping. Still, I'm going to try to remember to check out this brand and PGB again later on!

(I've got it on my nails now but I can't seem to find that picture. I'll try to add it later.)

*My links are being weird so I'm just typing them out, for the record!