Happy Planner does a "Be Happy" box periodically, with various HP items. They're usually about $50 so I have not really been tempted to order one before now. But they released one for their 5th anniversary that I decided was a good deal, and I actually set my alarm and got up to order it, because I figured it would sell out fast - and it did. I checked a couple of hours later and it was gone.

I haven't been posting here much so I probably haven't even mentioned that I've developed a Happy Planner habit. (I have talked about my Erin Condren habit but that was a while back.) I still have an Erin Condren planner for 2020 and I'm pretty sure I'll still buy one for 2021, but I also bought my first Happy Planner when everything was on sale after Christmas and I have now bought several different formats to try out. (I'm keeping the EC book at home, and I'm using a skinny classic HP to carry around and make lists with, two different classic horizontals for journaling - one for books and one for everything else - plus a mini vertical that I'm now using to record what I spend - having determined that it didn't work well for me as a planner, see - and a couple of different Happy Notes, a ton of stickers, and other assorted accessories.) I haven't quite hit every format yet but I have a bunch. I'll try to get some planner pictures up in future, but today I'm talking about the box.

Here's the actual outside of the box. (I'm linking one YouTube Video about this - see below - but there are many others, and if you've seen any of those this is all going to look very familiar.) 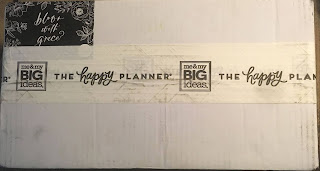 Even the tissue paper coordinates: 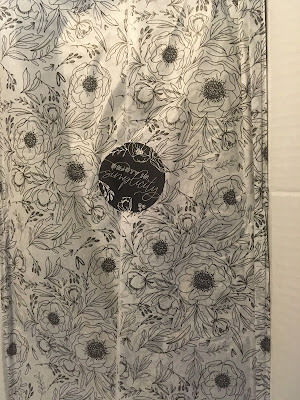 So does the card on top, of course. 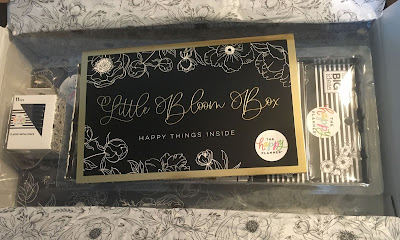 You can see most of the contents below: it's a set of black metal discs (which is apparently like a Happy Planner unicorn thing, they've only ever used them on one or two planner styles and never sold them separately), a whole lot of color-and-theme-coordinated stickers in black, white, and gold - one small sticker pad and two big 30-page sticker books. (I should add that I hadn't tried the metal discs at all yet, so I was really excited to get my hands on some - and black is great because it coordinates with so much else.) 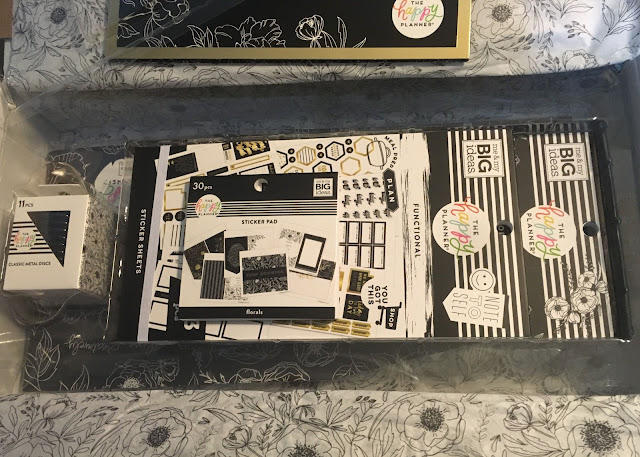 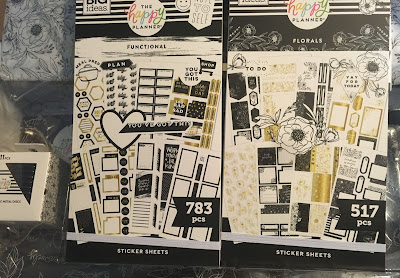 One big book is "functional" - black-bordered boxes and various shapes - and one is "florals" - a whole variety of line-drawn flowers, flower-decorated boxes, and on and on. See the video below for a flip-through.

And then in the bottom there's a box to hold all your sticker books - in coordinated black-and-white florals, of course. 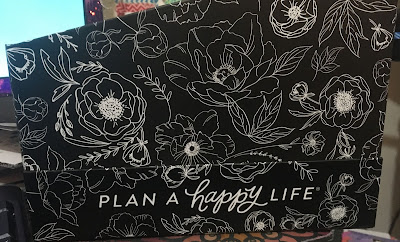 They've had these in other prints for a while now, but I'm just getting to the point where I was starting to think I had enough sticker books to need one. It's super-easy to put together, and holds a lot of sticker books - I put twelve in it, if I'm counting right, and it's not nearly full. (And it fits very nicely into one of those 3-tiered Michael's carts that everybody uses.) 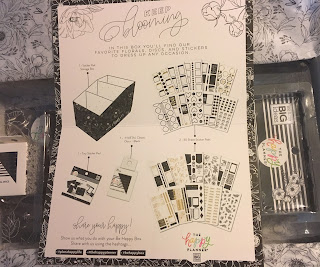 I am a fan of Heather Kell generally, anyway, and the way that she loses it over these sticker books is the best thing I've seen lately. "YALL. YALL. YALL"