(very late Thursday night)
I have bare nails and I still don't know what I'm putting on next, but I remembered to put cuticle oil on, for once, after I took off the old polish. I actually have been remembering at least every couple of weeks, which is not as often as I'd like but is better than nothing!

Also, I don't think I remembered to say in the last entry that this was the first full-on Butter London mani I'd done; that is, it was the first time I'd used their base coat, polish and top coat all at once. And it did last very well, so the early returns there are encouraging. I am sort of thinking I am going to use one of my old S-OPI polishes today, so this will not be another one of those, I don't think - but I will probably still use the BL Nail Foundation and Hardwear.

I only had two Sephora by OPI polishes, before today's box came: Domestic Goddess (red-violet) and Shopping Frenzy (fuchsia shimmer). For a while, Sephora carried very little nail polish other than their own brands, and I think I bought these off of their website somewhere in that period - maybe five years ago or a little more. I think Domestic Goddess is going to get the nod tonight since I can then say I'm carrying on my ten-day-old purple streak for a while longer. (Also, for the record, I think both these polishes are still available - or they were a while back when last I looked, anyway. UPDATE: see below for more about availability, generally, and I don't see either of these on the website any more, so that's probably no longer true.)

S-OPI seems like good polish, but the fact is that I don't have much nail polish that cost over the $5 mark. I can talk myself into buying things that cost under that pretty easily, but I have to want something pretty badly to spend more than that, in general. Which is why most of my OPIs are from a few years back when they were cheaper, and also why I don't own many indie polishes. That number doesn't seem to increase much with inflation, either - maybe because I'm poorer than I was five years ago when I was still working full-time. Although you notice that I'm quick enough to make exceptions for things that were on sale. I had already put a number of S-OPIs into my cart when I thought they were half-price ($4.50 was what they went in the cart as), and once I realized that they were actually 3-for $10 I quickly went and added more, and added the Illamasquas  - which were still well over the $5 mark! - to get free shipping, too.

Also, perhaps I should say while I'm talking about price points and so forth: I bought a few more polishes at the grocery store today. (This kind of thing is why I'm mostly trying to stay away from any place that sells nail polish.) I'll do a picture later of these, but real quickly, it was: NOPI Cinna-man of my Dreams, a texture; SH Private I (Diamond Strength); and a Cover Girl Glosstini in Sangria, which I added at the last minute when I realized there was a coupon sale and it was only around $1.75 after the coupon. All of these were things I had seen swatched somewhere lately, and on the first two, I tried to talk myself into putting one of them back, but then I told myself that I might not be able to find them again later! I am not very good at talking myself out of things sometimes.

(Friday)
I was just looking at Sephora's website again and I'm wondering if they are just closing out these polishes, because they're still on sale and some of them are gone completely. I thought at first that this might just be a special sale or some seasonal closeout, but maybe not. Last night I looked at the order I placed online and for one color (Traffic Stopper Copper) it said something to the effect of Permanently Out of Stock. So that sounds like either they're changing out a lot of colors or they're doing away with this line completely. I'm just speculating, but certainly if you want Traffic Stopper Copper you'd better go see if your local store still has some while they last! (Oh look -  this isn't anything official, either, but here's somebody saying that the Sephora/OPI collaborative brand is indeed being discontinued. And a similar story from Refinery 29.)

Okay, so here we go with the pictures - I don't do reveal videos or anything but I did take some pictures as I opened it up, which tells you that I was a little excited about this box o'stuff: 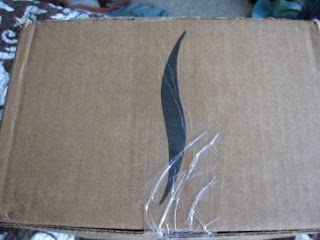 Here's everything that was in the box, including the samples 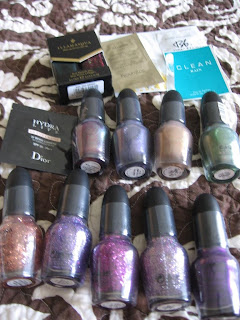 Kind of a lot of glitter-bombs in here!

Here's the Illamasqua duo (Viridian and Glitterati - I think this duo was released last Christmas): 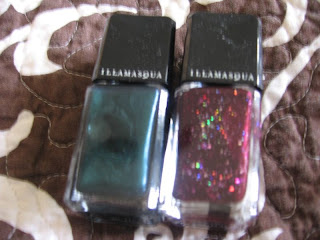 (They looked to me like smallish bottles, but I looked, and they're 0.5 ounce. I guess it's just that they're compact! These are my first Illamasquas, if you haven't figured that out.)

I took pictures like this of all the S-OPI bottles, but some of them were really blurry so I'm not going to post them all. But this is the three "Jewelry Top Coat" colors (Traffic Stopper Copper, Sugar Plum Fairies Gone Wild, and G-listen To Your Heart): 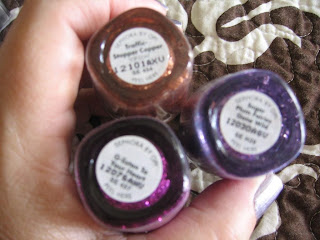 Those are chunky glitters, all in clear bases, I believe.

This one is tolerably legible, too (Ruby Without a Cause, I Only Shop Vintage, and I Don't Bite): 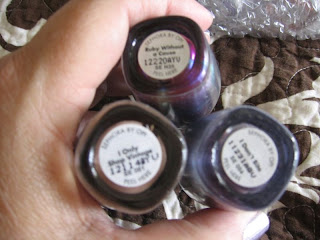 I Don't Bite is a slightly grayed-out holo glitter. Ruby Without a Cause has some duochrome shift, but I'm not entirely clear on what it shifts to. (I think I knew when I bought it but I've forgotten, and I'm feeling too lazy right now to go look.)  And I Only Shop Vintage is a sort of vintage-looking metallic, a golden-bronze.

The other three, which were the ones in the really bad picture, were Leaf Me at the Altar (green, naturally), It's Bouquet With Me (purple glitter in a sheer violet base), and Just a Little Dangerous, which is described as a metallic amethyst.

I picked them by cruising around people's swatches, so I hope I picked well. Looking at the colors that are remaining, I can see some other things that look interesting, but I'm going to try to content myself with what I've already got and not go ordering any more. We'll see how that goes.
Posted by Mel C at 5:46 PM