What I'm currently wearing: Sation Holiday Spirit, a multicolor fine glitter, over Illamasqua Viridian. Before that, it was Holiday Spirit over black (the last of my bottle of Hard As Nails Jet Black - but I still have other blacks, I've been actively trying to use that one up on nail wheels and such this fall). Viridian is a really beautiful dark green and I like it, but it's beginning to chip. And I don't know what I'm wearing next, exactly, but I'm pretty sure it will be China Glaze! since I got a baker's dozen of them in the mail today.

I think I had said previously that the China Glaze holiday polishes were a set of 15, but it was 13 polishes that came in the mail. I think I just miscounted, or double-counted, when I said it was 15. I think a dozen plus the one top-coat is the full set. Anyway, they are lovely, and thanks to Jessika of Polish Insomniac for hosting the giveaway. (Yay for free stuff!) Also, I guess for once I have to do a DISCLAIMER when I talk about these: they were given to me for free, obviously - although not specifically for review - directly from China Glaze. (Even though they weren't sent for review, I'm sure I will end up telling you what I think about them anyway, because I have opinions, and usually lots of them - that's what I have a blog for, right?)

Did I say that these are the first China Glaze polishes I have ever owned? Isn't that kind of unbelievable, given how much time I spend obsessing about nail polish? They are probably about the last really major U.S. nail polish brand that I haven't tried. (Not because I have anything against them or anything - more because you can buy Orly and OPI in the grocery stores around here, but not China Glaze. You have to brave Ulta for that, and I try to avoid Ulta for fear of what I'll leave there with, if you know what I mean) So anyway, I am expecting to adore these, with the possible exception of the texture one, which I have heard very mixed things about. Some people seem to like it fine, but others seem to hate it with, well, quite a lot of passion. "Cottage cheese" is one of the more common descriptions I've seen.

Jessika kindly gave me permission to use her picture so you can see all the thumbnails: 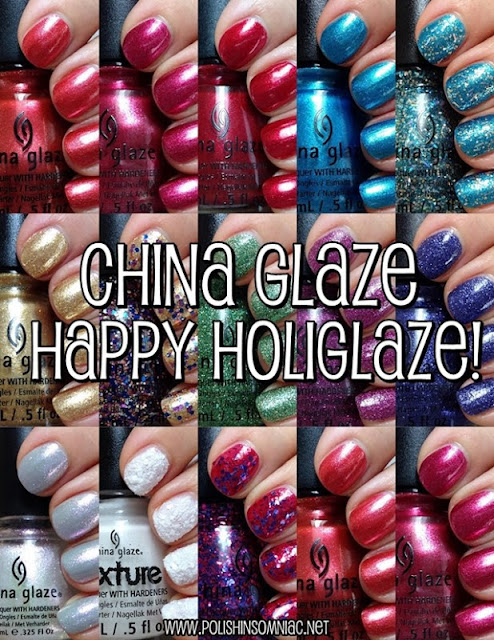 I got a mini of Travel in Colour, the topper, plus full bottles of the other 12. (Jessika's full swatch post is here.)
(Hm. Maybe that picture is where I got the idea that there were 15, actually - 3 rows of 5. But I believe the first two and the last two are the same, there!)

Here are the names, hopefully in the same order as the picture:
I'm working on a nail wheel for this but I'll post that later. So far, I really adore the three microglitter ones. And while I am not a big glitter-bomb enthusiast, Bells Will Be Blinging is... interesting. This might be the thing that gets me (somewhat) over my aversion to bar glitter. And Mingle With Kringle is also lovely.

Email ThisBlogThis!Share to TwitterShare to FacebookShare to Pinterest
Labels: china glaze, freebies, new to me, somebody else's picture