This Pretty Serious VT100 (named after a terminal, making it pretty much the ultimate geeky nail polish): 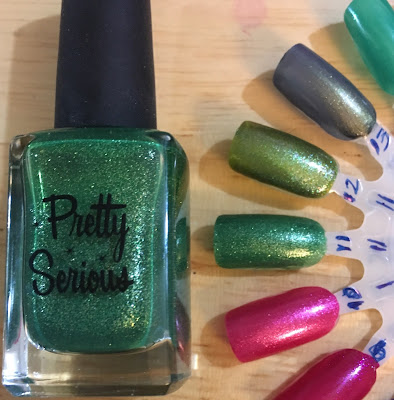 Pretty Serious has just re-done their website (it was supposed to be up in July, so September is pretty much par for the course for that kind of thing). This polish is discontinued but the new website has a "museum" which is meant to show all the old polishes, eventually, and VT100 is from their very first collection (called Hello World) which is all that's in the museum right now.  This is a really beautiful polish, but PS has some other oldies-but-goodies for sale on the new website, so keep an eye out if you're interested in this polish; it might make a reappearance at some point! (Note: I have no inside information whatsoever here. I just know that they've done limited-edition re-releases before, and there's certainly no reason to think they're stopping that.)
Posted by Mel C at 7:13 AM