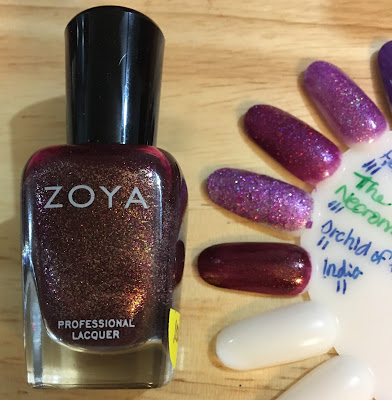 This is from the Ignite collection, along with Remy and Sansa. I got Remy first and I was crazy about it so I went and got more, but... I somehow failed to really fall in love with this one. You can see in the bottle that there's a lot going on but somehow it doesn't show up so much on the nail. Zoya describes it as "a deep, luxurious red with a gold liquid metallic shimmer" but I also notice in their pictures it looks much brighter than it does here. It also looks better on the early swatch I did, mostly because it looks somewhat brighter there too, I think. This is not a bad polish in any case, you understand, it's just a polish where I expected more oomph than I actually got from it. (I think this is the one where I layered something jelly-ish over it at one point - Ruby Pumps, I think it was - and I did totally love that combo.)