I went on a little tear of buying stuff that I really don't need (which, when it comes to nail polish, is basically all of it, these days, unless I can convince myself it's something I really don't already have). Here's the first installment, Beauty and the Beast polishes from Morgan Taylor, plus an extra polish that was marked down: 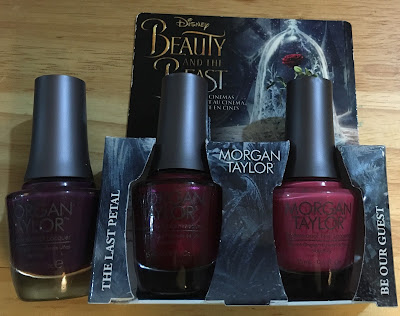 The single one is Royal Treatment, and you can see the names of the other two on the packaging, but for the record they're The Last Petal and Be Our Guest (the latter of which resulted in another B&tB earworm, I'd already had the title song stuck in my head for days).

I got these from Loxa Beauty - it was the first time I'd purchased anything from them, and the first Morgan Taylor polishes I'd had, as well. First I was looking at the set of minis, but all of this collection except the two above are very pale pastels and I knew I wouldn't wear those. This duo was the only one with two colors that I thought I would wear. (It was #1, here's #2 and #3 for comparison.) Added: I forgot to mention that the mini set did have a top-coat thing called Enchanted Patina, which "transforms any gel polish or nail lacquer, giving it a beautifully bronzed antique appearance." I usually love top-coat things but I have a million of those, too, which is why I passed it up. If it really makes things look bronze and antique, that actually doesn't sound quite like anything I have, but unless I see some evidence that it really does something different, color me unconvinced.

(I'll have wheel swatches to come later, but I'm pretty sure The Last Petal is the one I'm going to fall in love with.)
Posted by Mel C at 1:28 AM