Zoya's Earth Day promo has worked the same for years, I think, right? You order a minimum of six polishes (and there's a maximum, too, which I've never come near so I don't remember what it is) and you get them for half-price with free shipping. Plus you are supposed to either return an equal number of bottles of other brands of polish to Zoya for recycling, or responsibly recycle them yourself - but they don't police that part. (I've typically just recycled for myself, since I found out early on that if I try to remember to send polishes to Zoya, I just forget.)

So I ordered six polishes, and I got seven (I'll explain that below). This is the first three, Leisel, Aggie, and Finley: 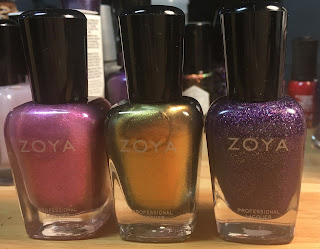 (Nobody seems to agree on how you pronounce "Leisel" - I grew up on The Sound of Music and am inclined to say LEE-sel like the von Trapp daughter, even though it's not spelled the same. I might not be correct but that's what I'm going with, in my head.)

And then I ordered the three Kisses jellies (R-L below, Princess, Libby, and Vickie) and found that when you ordered those three, you got a free fourth, which is Leia, the white one on the right. (I guess that was another promo that was ongoing at the time, because I don't see it when I look now.) 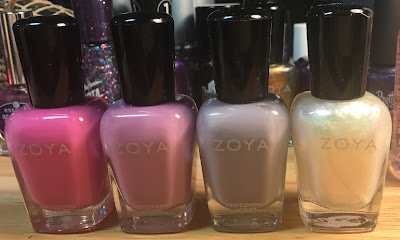 I already have one bottle of Leia, but I really love it so I'm happy to have a backup. It's actually a pinkish shimmer, despite what it looks like in the bottle.

Then when I opened the box, there was another freebie, which was a little Naked Manicure hand-care set. I thought I had taken a picture of the box, which I believe said Hydrate and Heal, but I can't find it. 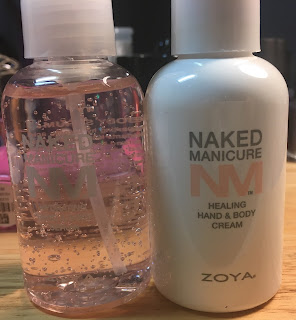 It's hard to read the clear packaging on that first bottle but it's called Hydrating Hand and Body Serum, and then the second (as you can probably see) is Healing Hand & Body Cream. They are two-ounce bottles, which is pretty generous as samples go. They also sent a bunch of swatches of the current collections, which I haven't taken pictures of but some of which look more interesting than I thought from just seeing other people's swatches.