I wasn't going to post this until Monday, but I notice PS has 20% off everything this weekend (code FUNNYBUNNY) so I thought I would go ahead & post now in case somebody is looking for ideas.

My Pretty Serious Top 5, in no particular order: 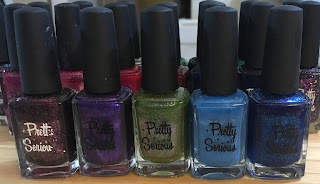 BSOD, Elliot, and Poltergeist Puddle are all still available through PS' classics page; Kashmir is also still available. Swatch and Learn was a collab polish and I really liked it, but I don't see it listed any more. (Poltergeist Puddle was presumably a Halloween release but I don't know which year offhand. BSOD was from Hello World, which was the original introductory PS line, and which was tech-related. BSOD = Blue Screen of Death, which is something that used to be the bane of Windows users but which you don't see often nowadays!)

I talked about Elliot the other day - that's where the link above (that is, the one just below the picture) goes. P-Puddle was also my favorite polish of 2016, so it has its own entry there.

(I did swatches, maybe I'll put some of them up over the weekend, too.)

Ichi Hanami was probably my Honorable Mention here, and it's from the Museum of Naileontology series. I've already talked about it recently so I won't say much this time. I do notice it's back in stock now, though. 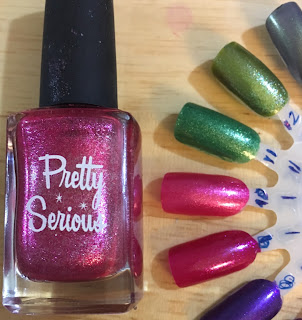 (No disclosures necessary, for the record.)