For Orly, I have several pictures divided by bottle type. What I have the most of are the regular large bottles: 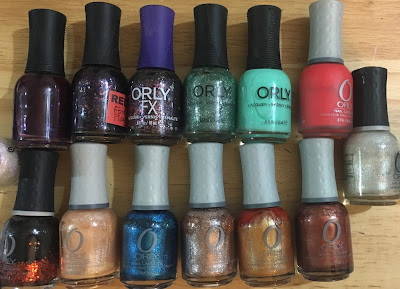 There are thirteen bottles pictured above, although actually I have a 14th one that's not here because it's a backup bottle. (That's Pearl Wisdom - I used to wear it all the time but I haven't worn it in years. So probably the backup bottle should be the first thing here to go into the destash box.)

Then I have four minis (hopefully in the right order): 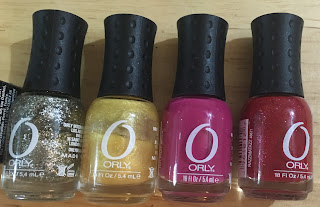 These came in a set: Tiara, Groupie, Hot Stuff, and Razzmatazz.

Then Orly Color Blast - I only have three and two of those were a set: 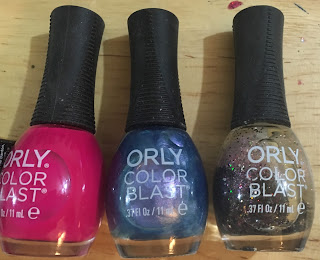 The first two are the duo, a Frozen tie-in. The pink is Free Spirit and the blue one is Frozen. And then the third one is just called Plum Chunky Glitter, as I recall. It shows up nicely over certain colors, but as usual with glitters, I haven't worn it much.

Hmm, favorites. They do make nice fuchsias, and I like both Hot Stuff and Free Spirit a lot. (And I like Frozen, for that matter. That was a nice duo.) But I don't think that quite rises to the level of favorites. For the record - although I've said it before and I will undoubtedly say it again - Rage is just not my color, although I think it's pretty. I know a lot of people are crazy about it but on me it doesn't look great.

Favorites: Fowl Play and Sparkling Garbage
(I only have 20 Orly polishes altogether, so two seems like a reasonable number of favorites. I don't have new swatches and I probably won't do a new one for Sparkling Garbage since I swatched it back in December. I definitely will try to get one done for Fowl Play, at least, though!)

Runners-up: Flagstone Rush (which is the brownish metallic), Sweet Peacock (only falls short because it's a dupe to other blue metallics), Intergalactic Space, R.I.P
Posted by Mel C at 7:03 AM